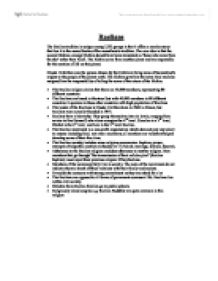 Raelians. The Raelian tradition is unique among UFO groups in that it offers a creation story that ties it to the sacred books of the monotheistic tradition. The core idea is that the ancient Hebrew concept Elohim should have been translated as those w

Raelians The Raelian tradition is unique among UFO groups in that it offers a creation story that ties it to the sacred books of the monotheistic tradition. The core idea is that the ancient Hebrew concept Elohim should have been translated as 'those who came from the sky' rather than 'God'. The Elohim come from another planet and are responsible for the creation of life on this planet. Claude Vorhilhon was the person chosen by the Elohim to bring news of humankind's origins to the people of the planet earth. ...read more.

countries with high population of Raelians * The leader of the Raelians is Claude Vorilhon born in 1946 in France, but Raelians were actually founded in 1973. * Raelians have a hierarchy. They group themselves into six levels, ranging from novice to Rael himself, who alone occupies the 6th level. Cocolios is a 3rd level, Chabot is the 4th level, and Lear is the 5th level Raelian. * The Raelian movement is a non-profit organisation which does not pay any salary to anyone including Rael, not even a secretary; all members are voluntary helpers donating some of their free time. ...read more.

New members that go through "the transmission of their cellular plan" (Raelian baptism) must reject their previous religion if they had one. * Members of the movement fully live in society. The rules of the movement do not indicate them to break off their relations with their family and society. * It would take someone with strong commitment as they are asked for a lot * The Raelians are opposed to all forms of permanent communal life. Raelians live within civil society. * Children from Raelian families go to public schools * Religiously mixed couples e.g. Raelian-Buddhist are quite common in this religion ...read more.