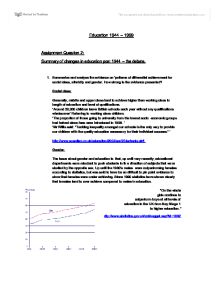 Summarise and analyse the evidence on patterns of differential achievement for social class, ethnicity and gender. How strong is the evidence presented?

Education 1944 - 1999 Assignment Question 2: Summary of changes in education post 1944 - the debate. 1. Summarise and analyse the evidence on 'patterns of differential achievement for social class, ethnicity and gender. How strong is the evidence presented? Social class: Generally, middle and upper class tend to achieve higher than working class in length of education and level of qualifications. 'Around 20,000 children leave British schools each year without any qualifications whatsoever' Referring to working class children. 'The proportion of those going to university from the lowest socio-economic groups had halved since fees were introduced in 1998.' 'Mr Willis said: "Tackling inequality amongst our schools is the only way to provide our children with the quality education necessary for their individual success." ' http://www.guardian.co.uk/education/2003/apr/23/schools.uk5 Gender: The issue about gender and education is that, up until very recently; educational departments were reluctant to push students in the direction of subjects that were studied by the opposite sex. ...read more.

This table shows the statistics of students from different ethnic backgrounds gaining 5 GCSE's, between 1996 and 2000. http://news.bbc.co.uk/hi/english/static/in_depth/uk/2002/race/educational_achievement.stm 2. Innate intelligence - Outline and analyse the arguments for 'natural intelligence' and discuss how and why the tests were used to select pupils on this basis. Middle class students are seen as "Naturally" more intelligent compared to working class students. Most exams are aimed at middle class students, as exams are mainly to do with memorisation and as most middle class students have tutors and different daily routines compared to working class students, it is definitely easier for them to study and memorise work in order for them to pass in their exams. "When it comes to social class, the differences are even more striking. In 1998 only a fifth of those whose parents were in unskilled manual jobs achieved five GCSE passes at grades A to C. In contrast, more than two-thirds of children of the professional and managerial classes got five GCSEs at this standard." ...read more.

4. Inheritance or environment? - discuss the evidence that 'genetic inheritance' does not account for differences in educational achievement. Intelligence is accountable based on the way a person thinks, and their style of learning, that's where the genetics intervenes with a person's level of "intelligence''. Genetics doesn't help a person gain knowledge, but helps them learn in a certain way that helps them intake and maintain that knowledge. "Give me a dozen healthy infants, well formed, and my own specified world to bring them up in and I'll guarantee to take any one at random and train him to become any type of specialist I might select - doctor, lawyer, artist, merchant, chief, and yes, even beggar man and thief, regardless of his talents, penchants, tendencies, abilities, vocations and race of his ancestors. There is no such thing as an inheritance of capacity, talent, temperament, mental constitution, and behavioural characteristics." 'Watson, 1925 p.82' Given this evidence, 'genetic inheritance' does not account for differences in educational achievement. ...read more.