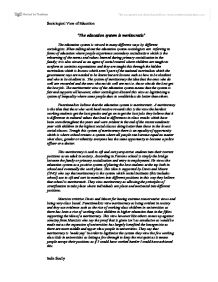 The education system is meritocratic

'The education system is meritocratic' The education system is viewed in many different ways by different sociologists. When talking about the education system sociologists are referring to forms of education where people experience secondary socialisation which is the relearning of the norms and values learned during primary socialisation in the family; it is also viewed as an agent of social control where children are taught to conform to societies expectations and they are taught this through the hidden curriculum which is lessons which aren't part of the national curriculum which the government says are needed to be learnt but are lessons such as how to be obedient and who to be obedient to. The system of meritocracy the idea that the ones who do well are rewarded and the ones who not do well are not i.e. those who do the best get the best job. The meritocratic view of the education system means that the system is fair and supports all however, other sociologists discard this view as legitimising a system of inequality where some people dues to wealth/class do better than others. Functionalists believe that the education system is meritocratic. A meritocracy is the idea that those who work hard receive rewards this is the view the hardest working students get the best grades and go on to get the best jobs they believe that it is difference in cultural values that lead to differences in class results which have been seen throughout the years and were evident in the end of the recent academic year with children in the highest social classes doing better than those in the lowest social classes. Trough this system of meritocracy there is an equality of opportunity which is where school creates a system where all people can become equal no matter what class, gender or ethnicity everyone has the same opportunity to become a police officer or a doctor. ...read more.

Coincidence or Conspiracy published in 2008 that the system is not designed to promote equality but to maintain the achievement gap between the white pupils and those pupils of ethnic minorities by stating this he immediately rejects the idea of a meritocracy as meritocracy is about people having equality from the beginning and being judged upon hard work however, if people are judged upon by ethnicity fairness cannot exist. Evidence for this is that Gillborn found that there was race labelling in the Local education Authorities (LEA) who expected a rise in white pupils attainment of 40 percent but only a 17 percent rise in that of black pupils and because interactionalist's believe that we are largely shaped by those around us if black pupils are not expected to do as well then they will not; this is the idea of a self fulfilling prophecy in which a child in continuously told that they will not do well so they do not do well. Stephan Ball (1981) also used ethnographic study in order to conduct his research. In his study 'Beachside Comprehensive' he found that teachers treat pupils differently based on streaming which is where a person is put in one stream for all subjects (assuming a person who is bright at one subject is bright at all subjects) and setting which is when you have different sets for each subject (accepts pupils are bright at different things) and because of this difference in the way that people are treated there can not be a meritocracy as not everyone is treated the same and as teachers are considered as a significant other in the way we establish ourselves if they view us as not bright we will consider ourselves not bright. Social democrats look at class and attainment. Hasley (1960's) criticised the education system for wasting talent this is because streaming exists as if you are good at a particular subject but are placed in a lowest because you are not good at national ...read more.

However Marxists hold the view that because there is such a small number of working class people in university that they are just there in order to make meritocracy seem as though it exists and legitimise the myth. Interactionalist's also hold the view that meritocracy doesn't exist and talk about labelling which matches in with the Marxist view put forward by Labov and Bernstein when they spoke about speech codes and interactionalist's talk about the significance of when teachers pick this up. Feminist's talk about gender differences which play a role in how well males and females do in education. Political views such as the social democratic and new right also hold the view that meritocracy doesn't exist because the system waste's talent or is wasteful of resources. Post modernists talk about how a meritocracy to make everyone equal can't exist because of the vast differences in society. When weighed up meritocracy appears to be a myth made in order to make society function well and for continuation of the classes as middle class people can't move down as they will inherit money from their parents so that means working class children need to go on and become working class adults. Although this concluding view is a very Marxist one it must be accepted that different schools of thought also have an input in the conclusion post modernism in particular as it sets out how different society is this means that there can't be a way to make everyone equal in order to have a meritocracy as things such as cultural capital advantage the middle class however, not all teachers are middle class which must be accepted but even despite this fact there is still the element of material deprivation which leaves the working class at a disadvantage because they can't afford the same things as the higher classes such as tutors. The education system therefore is not and can not be meritocratic as it meritocracy is influenced by many other factors. ?? ?? ?? ?? Sociological View of Education India Scully ...read more.