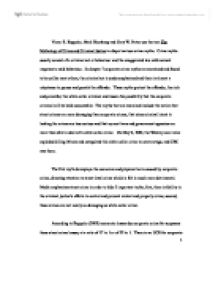 The Mythology of Crime and Criminal Justice.

Victor E. Kappeler, Mark Blumberg and Gary W. Potter use the text The Mythology of Crime and Criminal Justice to dispel various crime myths. Crime myths usually consist of a criminal act or behaviour and the exaggerated law enforcement response to said behaviour. In chapter 7 corporate crime myths are examined and found to be unlike most others; the criminal act is underemphasized and there is almost a reluctance to pursue and punish the offender. These myths protect the offender, the rich and powerful, the white collar criminal and lessen the possibility that the corporate criminal will be held accountable. The myths that are examined include the notion that street crimes are more damaging than corporate crimes, that since criminal intent is lacking the crimes are less serious and that current laws and government agencies are more than able to deal with white collar crime. On May 9, 1992, the Westray coal mine exploded killing 26men and catapulted this white collar crime to centre stage, and CBC was there. The first myth downplays the economic and physical harm caused by corporate crime, directing attention to street-level crime which is felt is much more detrimental. Media emphasizes street crime in order to hide 2 important truths; first, there is futility in the criminal justice's efforts to control and prevent violent and property crime; second, these crimes are not nearly as damaging as white collar crime. ...read more.

The third argument is that business is overregulated and the laws enacted to limit pollution, the quality of products and worker health and safety are unnecessary impedances. The American government declared 'war on crime' in the 80s however, in stark contrast to this war declaration, the funding for regulatory agencies has been slashed at least once by each of the past three presidents. As stated in Kappeler's text, "the official response to corporate crime enforcement has been roughly the equivalent of a city experiencing a wave of homicides and firing homicide investigators to prevent interference with the exercise of free will." (2000, 135). The Occupational Safety and Health Administration has 4 million work environments and less than 3000 safety inspectors to "regulate" them. The corporations are key players in the writing of regulations that they must later abide by, often these regulations can benefit corporate objectives and the government interference is actually wanted. The risk of sanctions is low thanks to a lack of people and resources and agencies entrenched in any number of conflicts of interest. The Federal Trade Commission (FTC) receives 9000 complaints annually, one of these is referred for prosecution, trials which have been delayed for 20 years. If apprehension does occur and actual sanctions are applied they are weak at best. In the 1.5% of cases where the offender was found guilty, only 4% of offenders went to jail, serving an average 37 days. ...read more.

What could be the consequences if safety is usurped by profits? The mining executives must have thought that perhaps an incident could occur, especially since 15 other incidents had occurred. Myth #3 -The Governmental Regulatory Agencies in effect The six year, $5 million dollar inquiry that followed the Westray disaster had Justice Peter Richard leading the quest to make sense of the tragedy. This inquiry was implemented solely because of the Westray disaster. This is a government agency that didn't exist, therefore it can't be said that current governmental agencies are sufficient. The lack of sanctions was in effect here. 54 charges, including manslaughter, and criminal negligence causing death were laid against 2 of the managers and the company itself. The first trial was thrown out due to prosecutorial error; a trial date was set for the appeal but was decided against due to a lack of direct evidence. All criminal charges were dropped. The release of the report by Justice Richard resulted in the suspension of 3 government mining officials, one was later fired. Also the mining inspector who failed to ensure that Westray complied with the corrections ordered and his boss were fired. This occurred when the report was released, six years after the event. Corporate crime certainly does pay well for white collar criminals. The lack of jail time may allow these crimes and criminals to avoid the front page news instead giving street crimes their usual spot. ...read more.