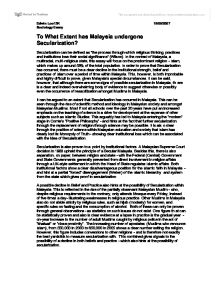 To What Extent has Malaysia undergone Secularization?

To What Extent has Malaysia undergone Secularization? Secularization can be defined as "the process through which religious thinking, practices and institutions lose their social significance" (Wilson). In the context of Malaysia, a multiracial, multi-religious state, this essay will focus on the predominant religion- Islam, which makes up around 58% of the total population. In order to prove that Secularization has occurred, there must be a clear decline in the institutional strength, belief and practices of Islam over a period of time within Malaysia. This, however, is both improbable and highly difficult to prove, given Malaysia's special circumstances. It can be said, however, that although there are some signs of possible secularization in Malaysia, there is a clear and indeed overwhelming body of evidence to suggest otherwise or possibly even the occurrence of resacrilization amongst Muslims in Malaysia. It can be argued to an extent that Secularization has occurred in Malaysia. This can be seen through the rise of scientific method and ideology in Malaysian society and amongst Malaysian Muslims. Most if not all schools over the past 20 years have put an increased emphasis on the teaching of science in a drive for development at the expense of other subjects such as Islamic Studies. This arguably has led to Malaysia entering the "modern" stage in Comte's "Positive Philosophy"- and hints at the fact that further secularization through the replacement of religion through science may be possible. ...read more.

All ethnic Malays (who make up the majority of the population) become Muslim from birth. The very fact that Islam is dominant within the life of the Malay child from birth until death provides a compelling counter against the argument that secularization has occurred in Malaysia. Islam's institutional strength is also clearly manifested in the overt Islamic nature of governance. Government policy in general has a very strong Islamic ethos- reflected in the promotion of "Islam Hadhari" or "Civilization Islam", which, amongst other things, advocates moral integrity and faith in Allah as the principals of Malaysian governance. Both major Malay political parties strongly tie themselves in with the idea of Islam, and use Islamic language at every possible opportunity. The United Malay National Organization (UMNO), the main governing party, is Islamic by both definition and nature, controls 2/3rd's of the seats in the Dewan Rakyat (House of Representatives), and leads nearly every state government. The Opposition (and Fundamentalist) Islamic Party of Malaysia (PAS) controls 6 seats in the Dewan Rakyat, together with the state government of Kelantan. The ideals of Islam and Islamic Principals also manifest themselves in Malaysian foreign policy- through Malaysia's advocacy of an "International Islamic Economic Partnership" and its keen participation in the Organization of Islamic States. Malaysia's constant offer to send peacekeepers to Muslim areas in trouble (one example of which is the Malaysian Army's role under the UN in protecting Bosnian Muslims) ...read more.

This, however, cannot be done due to the fact that criminal justice and capital punishment is not on the State List. The degree of social control and surveillance in Malaysia over Muslims, combined with overbearing social expectations due to the central role of religion, makes it very difficult for people to show any loss of faith or lapse of practice. It could even be argued (but due to a lack of statistics, not proven) that Malaysia may suffer from "belonging without believing" as Muslims must still belong due to both legal and social pressures, but may not necessarily believe. It can also be argued that the Islamic faith in Malaysia no longer constitutes a religion by right, given its wide ranging institutional presence- instead, it has been swallowed whole by both state institutions and political parties- leading to an unusual situation in which religion becomes a vehicle for other interests, instead of politics and government being the vehicle of religion. In conclusion, it must be said that despite the uncertainty surrounding the Islamic faith in Malaysia, as well as a glaring and unsatisfying lack of statistics that make it all but impossible to prove either argument, evidence clearly shows that secularization is not happening in Malaysia, and certainly will not happen in the near future, given the wide-ranging presence of the Islamic faith both in government, society, politics and culture. ?? ?? ?? ?? Edwin Loo13K 19/09/2007 Sociology Essay ...read more.