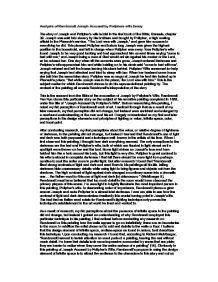 Analysis of Rembrandt Joseph Accused by Potiphars wife Essay The story of Joseph and Potiphar's wife is told in the first book of the Bible, Genesis, chapter 39. Joseph was sold into slavery by his brothers and bought by Potiphar, a high ranking official in the Pharaoh's service. "The Lord was with Joseph," and gave him success in everything he did. This pleased Potiphar and before long Joseph was given the highest position in the household, and left in charge when Potiphar was away. Now Potiphar's wife found Joseph to be very good looking and had approached him several times saying "come to bed with me;" and Joseph being a man of God would not sin against his master or the Lord, so he refused her. One day when all the servants were gone, Joseph entered the house and Potiphar's wife approached him and while holding on to his cloak said "come to bed with me". Joseph refused and left the house leaving his cloak behind. Potiphar' Wife screamed for help saying that Joseph had attacked and tried to sleep with her. When her husband came home she told him the same false story. Potiphar was so angry at Joseph he had him locked up in Pharaoh's prison. "But while Joseph was in the prison, the Lord was with him." ...read more.

I first noticed before conducting any research on Rembrandt or this painting how the walls appear to go on indefinitely; there are no boundaries to the room. In addition the artist chose not to add and details to the walls or floor. I believe that the design element of infinite space, endless space as found in nature, best describes this technique. Upon conducting my research I found that, according to Richard Muhlberger, "Rembrandt learned to lavish attention on small parts of a painting, leaving the rest without much detail. He knew that details look more impressive surrounded by areas that are plain; they are harder to notice when they cover the entire surface of a painting" (16). Obviously in this painting of Joseph Accused by Potiphar's Wife, Rembrandt's purpose in using the design element of infinite space is to attract the audience to the characters in this story and not so much their surroundings, with the exception, perhaps, of the bed. Therefore, my perception of this design element was only enlarged by the knowledge of Rembrandt's motivation in including infinite space in his composition. My first perceptions about the colors in the painting did not change, but instead I gained an understanding of how the colors Rembrandt used contributed to the characters' portrayal/depiction. ...read more.

She points with her right hand an accusing finger at a dark maroon cloak draped on one of the bed posts. Her other hand nurses a torn lapel of an under garment, suggesting she has been in some manner violated. She looks, with a creased forehead, at a tall, dark figure to the her left, whom for the lack of lighting shimmers in an elegant uniform, his head donning a turban. He leans on the back of her chair, his hand closed, but his arm pointing in the same direction as the cloak. His other arm is on his hip directly above a sheathed sword. His overall stature and facial expression appears quizzical, as he ponders over the serious situation. The situation of course concerns the accusation his wife makes of the owner of the cloak. The lonely figure in the corner dressed in the drab olive green tunic stands silently listening to the woman, obviously the accused owner of this cloak. His maroon red sash with the keys reveals his importance to the household. Rembrandt clearly brought this "scene to life convincingly"(Schwartz 15). For him to have accomplished this feat, he "had to give each figure an appropriate expression, pose, and costume"(Schwartz 15). All this Rembrandt has done, leaving us with a tragic moment in biblical history captured beautifully in this awesome painting of Joseph accused by Potiphar's wife. ...read more.