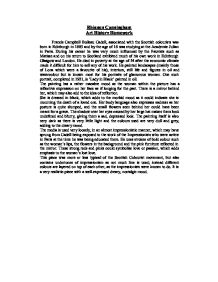 Francis Campbell Boileau Cadell, associated with the Scottish colourists was born in Edinburgh in 1883 and by the age of 16 was studying at the Academie Julian in Paris. During his career he was very much influenced by the Fauvists such as Matisse and on his return to Scotland exhibited much of his own work in Edinburgh Glasgow and London. He died in poverty at the age of 54 after the economic climate made it difficult for him to sell any of his work. He painted landscapes (mainly those of Lona which were a favourite of his), interiors, still life and figures in oil and watercolour but is known most for his portraits of glamorous women. One such portrait, completed in 1921, is ‘Lady in Black’ painted in oil.

The painting has a rather macabre mood as the woman within the picture has a reflective expression on her face as if longing for the past. There is a mirror behind her, which may also add to the idea of reflection.

She is dressed in black, which adds to the morbid mood as it could indicate she is mourning the death of a loved one. Her body language also expresses sadness as her posture is quite slumped, and the small flowers seen behind her could have been meant for a grave. The shadow over her eyes caused by her large hat makes them look undefined and blurry, giving them a sad, depressed look. The painting itself is also very dark as there is very little light and the colours used are very dull and grey, adding to the dreary mood.

The media is used very loosely, in an almost impressionistic manner, which may have sprung from Cadell being exposed to the work of the Impressionists who were active in Paris at the time he was being educated there. He uses strokes of bold colour such as the woman’s lips, the flowers in the background and the pink furniture reflected in the mirror. These strong reds and pinks could symbolise love or passion, which adds emphasis to the woman’s lost love.

This piece was more or less typical of the Scottish Colourist movement, but also contains undertones of impressionism as not much line is used; instead different colours are layered on top of each other, as the impressionists were known to do. It is a very realistic piece with a well-expressed dreary, nostalgic mood.