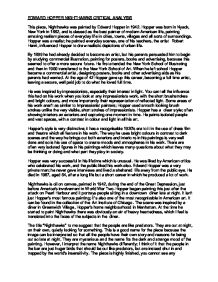 EDWARD HOPPER NIGHTHAWKS CRITICAL ANALYSIS This piece, Nighthawks was painted by Edward Hopper in 1942. Hopper was born in Nyack, New York in 1882, and is classed as the best painter of modern American life, painting amazing realism pieces of everyday life in cities, towns, villages and all sorts of surroundings. Hopper was a realist; he painted everyday scenes, one of his teachers, the artist Robert Henri, influenced Hopper to draw realistic depictions of urban life. By 1899 he had already decided to become an artist, but his parents persuaded him to begin by studying commercial illustration, painting for posters, books and advertising, because this seemed to offer a more secure future. He first attended the New York School of Illustrating and then in 1900 transferred to the New York School of Art. When he left school Hopper became a commercial artist, designing posters, books and other advertising aids as his parents had wanted. At the age of 42 Hopper gave up this career, becoming a full time artist, leaving a secure, well paid job to do what he loved full time. He was inspired by impressionists, especially their interest in light. You can tell the influence this had on his work when you look at any impressionists work, with the short brushstrokes and bright colours, and more importantly their representation of reflected light. Some areas of his work aren't as similar to Impressionist painters; Hopper used smooth looking brush strokes unlike the very visible, short strokes of impressionists. ...read more.

The figures in the image appear to be a barman, a man and woman sitting together, and another man sitting by himself. The way they are dressed suggests a 1920's theme, but it could also be influenced from the 1940's - 1950's gangster films that were so popular in America. The intense brightness means that the people inside are exposed and vulnerable to the outside world and the preying eyes of passers by and the figures hunch their shoulders protectively. Hopper used himself as a model for both the seated men, suggesting he feels as though he is in the same situation as them. He modelled the woman, as he did all of his female characters, on his wife Jo. Hopper was a hard man to live with and was less emotionally attached to his wife than she was to him. From Jo's diaries we learn that Hopper described this work as a painting of just three characters. The man behind the counter is in fact free, and it is the other figures that are trapped. The question we ask ourselves is are the men there to prey on the woman, or has she come in to prey on the men? The piece is separated into two different sections; to the right hand side is the artificially lit up bar, and to the left is the dark, empty street with a shadowy, sinister alley. The caf� does not look at all welcoming, in fact somewhat foreboding. ...read more.

He believes that there are only three key figures in the painting. They are, the couple sitting together and the barman. The barman though imprisoned in the triangular counter, is in fact free. He has a job, and a home, he can come and go as he pleases. Hopper says it is the customers who are the nighthawks. He writes, "Nighthawks are predators - but are the men there to prey on the woman, or has she come in to prey on the men? To my mind, the man and woman are a couple, as the position of their hands suggests, but they are a couple so lost in misery that they cannot communicate; they have nothing to give each other." So the barman and the couple are a complete contrast of being trapped and being free. Hopper then says "I see the nighthawks of the picture not so much as birds of prey, but simply as birds: great winged creatures that should be free in the sky, but instead are shut in, dazed and miserable, with their heads constantly banging against the glass of the world's callousness." It is clear that Hopper is making a statement about American life at the time it was painted. He suggests that people blame others for their lack of success but it is in fact their fault. He hints at the untouched talent of human nature, by saying that people are "great winged creatures" that "are shut in". I think this suggests that Hopper is somewhat bitter towards people and blames them for the pain and suffering they endure. ...read more.