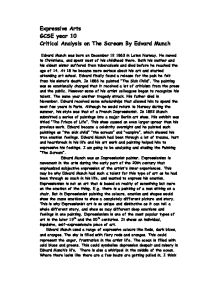 Critical Analysis on The Scream

Expressive Arts GCSE year 10 Critical Analysis on The Scream By Edvard Munch Edvard Munch was born on December 12 1863 in Loten Norway. He moved to Christiana, and spent most of his childhood there. Both his mother and his oldest sister suffered from tuberculosis and died before he reached the age of 14. At 18 he became more serious about his art and started attending art school. Edvard finally found a release for the pain he felt from his sister's death. In 1886 he painted "The Sick Child". The painting was so emotionally charged that it received a lot of criticism from the press and the public. However some of his artist colleagues began to recognize his talent. The same year another tragedy struck. His father died in November. Edvard received some scholarships that allowed him to spend the next few years in Paris. Although he would return to Norway during the summer, his style was that of a French Impressionist. In 1892 Munch submitted a series of paintings into a major Berlin art show. His exhibit was titled "The Frieze of Life". This show caused an even larger uproar than his previous work. ...read more.

The vivid blood red of the sky, the yellowish cast to the skeletal face and the dark cold colours of the river, all added to the emotionalism of this piece. This painting is like a brilliant ray of fireworks; the most powerful colours are used to portray rays of emotion that actually reach out to the audience. No matter where your eye first lands on this piece of art, it immediately is drawn to the central figure .There is so much action going on in this painting, and then amongst all the chaos, standing in the center of the piece is our subject; simply depicted, no extreme facial features, standing, screaming. It's a subject of sheer panic and despair. The painting showes a hairless, broken creature with a head like an inverted pear, its hands clapped in horror to its ears, its mouth open in a vast, soundless scream. This person appears locked in a state of terror frozen by a fear, real or imagined. When I look at it I can see pain and terror in the face, like the world is about to explode. I can see true emotion used here, every possible feeling that one may have is screaming out of this painting. But I don't believe that the person itself is screaming. ...read more.

And how in dreams and nightmares we go through our lives in our minds and they might be the only places in the world were we could express our true emotions and feelings. This is in our own minds. So it can show that the mind is one of the loneliest, scariest, and the most amazing place were we can escape to, and were no one else can know what you are thinking. I have seen how to symbolise certain things by colours and shapes and how to give a certain impression and mood. I can see how amazing dreams and nightmares are because they are not in this world, but they are only true portraits our ourselves and our lives so anything is possible and even our darkest and saddest feelings that we bury away inside us can show and come to life in our dreams. I have learnt to make a straightforward piece of art turn into an emotional and deep feeling that every person has different views and feeling about depending on their own lives. I can now see how this piece of artwork is truly individual, remarkable and unique as it shows that emotions of a broken man. By Sarah Dawson 10V4 ...read more.