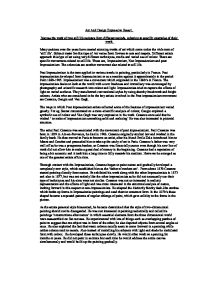 Discuss the work of two still life painters from different periods, referring to specific examples of their work.

Art And Design Expressive Essay1. Discuss the work of two still life painters from different periods, referring to specific examples of their work. Many painters over the years have created stunning works of art which come under the wide term of 'still life'. Subject mater for this type of Art varies from flowers to cats and teapots. Different artists approach this type of art using very different techniques, media and varied use of colour. There are specific movements related to still life. These are, Impressionism, Neo Impressionism and post Impressionism. The colourists are another movement also related to still life. Post Impressionism is the term applied to various trends in painting, particularly in France. Post impressionism developed from Impressionism or as a reaction against it approximately in the period from 1880-1905. Impressionism was a movement which originated in the 1860's in France. The impressionists desire to look at the world with a new freshness and immediacy was encouraged by photography and scientific research into colour and light. Impressionists tried to capture the effects of light on varied surfaces. They transformed conventional styles by using sketchy brushwork and bright colours. Artists who are considered to be the key artists involved in the Post impressionism movement are Cezanne, Gaugin and Van Gogh. ...read more.

He did not paint in sections but each time he would address the entire canvas simultaneously and would build up the painting gradually. Cezannes later paintings from the 1880's onwards were much more controlled than his earlier paintings. In these later paintings the paint became thinner, his colours richer, and rigidly regular strokes of paint became loosely painted patches of colour, often beside patches of bare canvas. It was a very new and original way of painting which laid the foundations for the major art movements of the 20th century from Cubism to Abstract art. Still life painting had been extremely popular during the 17th century (especially in Holland) but it had declined by the 19th century but Cezanne renewed its status at this time. However he made no attempt to create a realistic representation of the subjects he painted and instead he concentrated on colour and composition. His simple objects with their stark geometry inspired Picasso's early cubist still life's. 'Cherries and Peaches' is a piece of art by cezzanne. This still life depicts some of the styles he experimented with such as the representation of objects from a number of angles. In this painting the perspective of the picture is altered as the plate of cherries is shown from a deferent angle to the other objects. ...read more.

However later on Peploes popularity grew and in 1988 his painting 'The girl in White' was sold for �500 000, making it one of the most expensive 20th century British works of art. Peploes work is distinctive and recognisable due to its strong use of colour, fluent brushwork and keen sense of pattern. Below is a still life done by Peploe called 'Still Life with Roses'. In this painting the brush strokes are visible and in some areas are more bold than others. The predominant colours are blue and orange which are complementary colours. I personally really like this still life. It is very bold and the heavy use of colour makes it very original. Also the positive contrast of the two main colours, orange and blue, makes the painting attractive to the eye at first glance and as you look closer the detail and composition draws your eye in. In conclusion, it is evident that both S.J. Peploe and Paul Cezanne were talented and unique painters. Their styles were very different and their influences also varied. Cezanne was associated with post Impressionism and Peploe was involved in the colourists movement and this origin is evident in the painters style. Their use of colour and brushwork is also contrasting. However, although Peploe and Cezanne had different aims they both created very expressive works of arts with interesting and bold compositions and original use of media. ...read more.