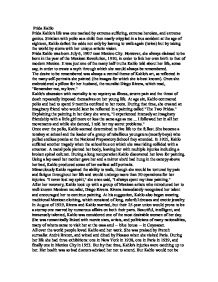 Frida Kahlo Frida Kahlo's life was one marked by extreme suffering, extreme heroism, and extreme genius. Stricken with polio as a child then nearly crippled in a bus accident at the age of eighteen, Kahlo defied the odds not only by learnng to walk again (twice) but by taking the world by storm with her unique artistic vision. Frida Kahlo was born July 6, 1907 near Mexico City. However, she always claimed to be born in the year of the Mexican Revolution, 1910, in order to link her own birth to that of modern Mexico. It was just one of the many half-truths Kahlo told about her life, some say, in order to create a myth through which she would always be remembered. The desire to be remembered was always a central theme of Kahlo's art, as reflected in the many self-portraits she painted (the images for which she is best known). ...read more.

A metal pole pierced her body, leaving her with multiple injuries including a broken spinal column. During a long recuperation Kahlo discovered her love for painting. Using a lap easel her mother gave her and a mirror she'd had hung in the canopy above her bed, Kahlo produced some of her earliest self-portraits. Miraculously Kahlo regained the ability to walk, though she would be tortured by pain and fatigue throughout her life and would undergo more than 30 operations for her injuries. "I never lost my spirit," she once said, "I always spent my time painting." After her recovery, Kahlo took up with a group of Mexican artists who introduced her to well-known Mexican muralist, Diego Rivera. Rivera immediately recognized her talent and encouraged her to continue painting. At his suggestion, Kahlo also began wearing traditional Mexican clothing, which consisted of long, colorful dresses and exotic jewelry. In August of 1929, Rivera and Kahlo married, but their 25-year union would prove to be a stormy one marred by numerous affairs on both their parts. ...read more.

The pain of Kahlo's complex marriage was often reflected in her paintings, such as one entitled, "Frida y Diego." Although the couple did divorce, in 1939, they reunited in less than a year. For all their troubles, they remained one another's greatest loves and greatest fans. That same year Kahlo suffered another blow. Her right leg had to be amputated below the knee due to a gangrene infection. On July 13, 1954, at the age of 47, Frida Kahlo died. The cause was never officially determined. The last entry in Kahlo's diary read, "I hope the leaving is joyful and I hope never to return." Little known outside of the art world until the 1990's, Frida Kahlo has recently become a cultural icon. Numerous books and articles have been written about her. She has been the subject of three documentaries, and a feature film about her life was released October 25, 2002. For a woman who wished to be remembered, it seems, her wish has come true. ...read more.