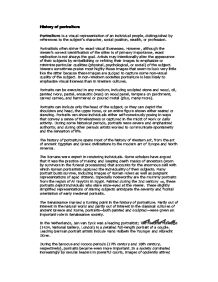 History of portraiture Portraiture is a visual representation of an individual people, distinguished by references to the subject's character, social position, wealth, or profession. Portraitists often strive for exact visual likenesses. However, although the viewer's correct identification of the sitter is of primary importance, exact replication is not always the goal. Artists may intentionally alter the appearance of their subjects by embellishing or refining their images to emphasize or minimize particular qualities (physical, psychological, or social) of the subject. Viewers sometimes praise most highly those images that seem to look very little like the sitter because these images are judged to capture some non-visual quality of the subject. ...read more.

The history of portraiture spans most of the history of Western art, from the art of ancient Egyptian and Greek civilizations to the modern art of Europe and North America. The Romans were expert in rendering individuals. Some scholars have argued that it was the practice of making and keeping death masks of ancestors (worn by survivors in the funeral processions) that accounts for the enormous skill with which Roman portraitists captured the individuality of their subjects. Many portrait busts survive, including images of Roman rulers as well as poignant representations of aged citizens. Especially noteworthy are the mummy portraits from the region of Al Fayyum in Egypt. ...read more.

In a society dominated increasingly by secular leaders in powerful courts, images of opulently attired figures were both symbols of temporal power and wealth, and a means to affirm the authority of certain individuals. Flemish painters Sir Anthony van Dyck and Peter Paul Rubens excelled at this type of portraiture. Also during these periods, artists increasingly studied the facial expressions that accompanied different emotions and they emphasized the portrayal of these human feelings in their work. In particular, Italian sculptor Gianlorenzo Bernini and Dutch painter Rembrandt explored the many expressions of the human face. This interest fostered the creation of the first caricatures, credited to the Carracci Academy, run by painters of the Carracci family in the late 16th century in Bologna, Italy Group portraits were produced in greater numbers during the baroque period, particularly in the Netherlands. ...read more.