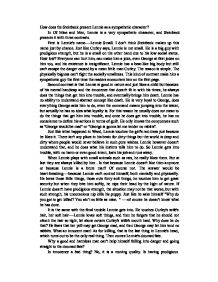 How does the Steinbeck present Lennie as a sympathetic character

How does the Steinbeck present Lennie as a sympathetic character? In Of Mice and Men, Lennie is a very sympathetic character, and Steinbeck presents it with three contrasts. First is Lennie's name----Lennie Small. I don't think Steinbeck makes up this name just by chance. Just like Curley says, Lennie is not small. He is a big guy with prodigious strength, but he is a small on the other hand due to his low social status. How low? Everyone can hurt him, can make him a joke, even George at first jokes on him too, and his existence is insignificant. Lennie has a bear-like big body but still can't escape the danger caused by a mean little man Curley. The reason is simple. The physically bigness can't fight the socially smallness. This kind of contrast make him a sympathetic guy the first time the readers encounters him on the first page. Second contrast is that Lennie is good in nature and just likes a child but because of his mental handicap and the innocence that doesn't fit in with his times, he always does the things that get him into trouble, and eventually brings him death. ...read more.

So Lennie gets into trouble, with no harm or even good intent, losts his job and runs away. When Lennie plays with small animals such as rats, he really likes them. But at last they are always killed by him . Is that because Lennie doesn't like thim anymore or because Lennie is a brute man? Of course not. The answer would be heart-breaking----because Lennie can't control himself, both mentally and physically. He loves those little things, those cute furry soft things, he touches him to get great security but when they bite him softly, he nips their head by the light of nature. If Lennie doesn't have prodigious strength, the situation may not be that worse, but with such strength, his unconscious nip kills his puppy. Just like he asks himself "Why do you got to get killed? You ain't so little as mice. " ----of course he doesn't know what he has done. It is the same with the final trouble Lennie gets into. ...read more.

The third contrast is that the hope inside Lennie and the impossibility the hope is. Lennis has strong belief in his future life with George. He always begs George to tell the blue print again and again, even if he remembers every sentence of the plan. "And the rabbits, George, talk about them" or "I would tend the rabbits" Lennie says as if what they are talking is real, as if tomorrow they are going to live that free and happy life. The rabbits, yes, the rabbits, that is what Lennie cares about because rabbits represent Lennie's great hope for the coming lovely days. But every reader knows that their dream would never come true because Lennie would never make things right. He will make mistakes, unconsciously, he will get scoldings for his dumb, but next time, he will repeat his previous actions, again. This dead circle would never end The more fierce Lennie's hope grows, the more sympathetic he is. Dreaming of a impossible dream and take it as a real thing----only Lennie can confuse the truth to such extent and that's why he is so sympathetic. That's how Steinbeck presents Lennie as a sympathetic character in the novel. ...read more.