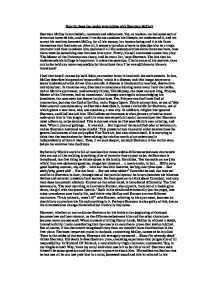 How far does the reader sympathise with Sherman McCoy?

How far does the reader sympathise with Sherman McCoy? Sherman McCoy is narcissistic, covetous and adulterous. Yet, as readers, we feel some sort of attraction towards him, and even if we do not condone his lifestyle, we understand it, and we accept his motives, because McCoy, for all his money, is a human being and it is his flaws themselves that fascinate us. After all, it seems a paradox of sorts to describe him as a tragic character and then condemn him, because if all his contemporaries share the same flaws, then there must be something else that sets him apart. Firstly, his self-awareness comes into play: 'The Master of the Universe was cheap, and he was a liar,' says Sherman. The fact that he understands his failings is important: it raises the question, if he is aware of his motives, then can he be held any more responsible for his actions than if he was oblivious to his own intentions? I feel that he still cannot be held liable, as another factor is involved: his environment. ...read more.

As Sherman is introduced, the first thing he thinks about is his family. He thinks, 'But the smile on her [his wife's] face was obviously genuine, altogether pleasant ... a lovely smile, in fact ... Still a very good looking woman, my wife ... with her fine thin features, her big clear blue eyes ... But she's forty years old! ... Not her fault ... But not mine either!' Towards the end, the internal conflict in Sherman is clear, through use of the parallel syntax: he is torn between his inherent desires and external pressure from society. He then goes on to think about Campbell, and only then does he commit adultery. Kramer on the other hand, is introduced differently. The first sentence is, 'The next morning, to Lawrence Kramer, she appears, from out of a feeble gray dawn, the girl with the brown lipstick." Both in his mind and structurally (on the page), lust takes precedence over family life, and this is why McCoy and Kramer are two different characters. "Truly pathetic, wasn't it?" asks Kramer, referring to his apartment, because he also fails to appreciate his life and anything in it. ...read more.

At this moment, Sherman transcends the seemingly trivial desires of the press, and he acknowledges this, saying, 'The eerie thing was ... that he was not shocked and angered.' We should, however make it clear that at no point does he realise the flaws that set his tragedy in motion: this rebirth is not his Anagnorisis. Should we then conclude that he has learnt nothing? Interestingly, Aristotle extensively discussed catharsis, and considered it to be linked to the positive social function of tragedy - this is shown to an extent here. Through destruction and suffering emerges a new man, but also a new city, although it is questionably whether or not it has improved at all. I feel that it may be slightly inaccurate to describe Sherman's metaphorical death as a catharsis for the entire city. After all, most characters come away with little insight, and the ending still displays the twisted social values that we observed at the very beginning. McCoy is the lone figure emerging from the crumbling city. 'Judge ... it don't matter! It don't matter!' says Sherman, and 'He smiled.' By the end, McCoy needs no sympathy: he comes away with a pure mind, and achieves a separation of himself and the city. ...read more.