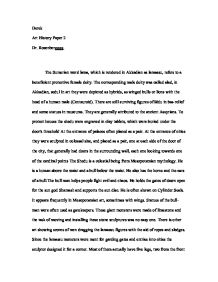 Derek Art History Paper 2 Dr. Rosenbergggg. The Sumerian word lama, which is rendered in Akkadian as lamassu, refers to a beneficient protective female deity. The corresponding male deity was called alad, in Akkadian, sedul In art they were depicted as hybrids, as winged bulls or lions with the head of a human male (Centauroid). There are still surviving figures of ��du in bas-relief and some statues in museums. They are generally attributed to the ancient Assyrians. To protect houses the shedu were engraved in clay tablets, which were buried under the door's threshold. At the entrance of palaces often placed as a pair. At the entrance of cities they were sculpted in colossal size, and placed as a pair, one at each side of the door of the city, that generally had doors in the surrounding wall, each one looking towards one of the cardinal points The Shedu is a celestial being from Mesopotamian mythology. ...read more.

Since the lamassu monsters were ment for garding gates and entries into cities the sculptor designed it for a corner. Most of them actually have five legs, two from the front and for legs in motion from the side veiw. This provided a conceptual picture of the animal making it more realistic and therefor better to do its job of frighten people, which is one key difference from the calm egyptian art. The mesopotamian art seems to strive for fear and the importance of the high ranking officials. For example Sargon, a king of mesopotamia, once wrote in an inscription "i built a city with the labours of the peoples subdued by my hand..." A lot of their art depicts war and the hunting of animals. The Egyptians were one of the first major civilizations to codify design elements in art. ...read more.

Almost all of their art is calm, cool, and collect. The people who are you usually sculpted such as pharahs and important people seem not to be looking at the people who are looking at the art but seem to be focusing on a higher power of something of spiritual importance. The egyptians seem to display in their art that the individual is not important but that the spiritual world is what they are more in touch with. A lot of the art possesses a certain stiffness, with figures poised upright and rigid in a most regal fashion. Bodily proportions also appear to be mathematically perfect, giving rise to a sense of fantastic perfection in the figures depicted. This most likely was used to reinforce the godliness of the ruling society. ...read more.