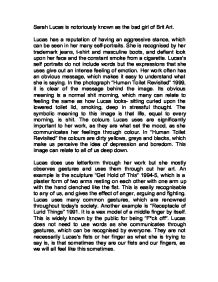 Sarah Lucas is notoriously known as the bad girl of Brit Art.

Sarah Lucas is notoriously known as the bad girl of Brit Art. Lucas has a reputation of having an aggressive stance, which can be seen in her many self-portraits. She is recognised by her trademark jeans, t-shirt and masculine boots, and defiant look upon her face and the constant smoke from a cigarette. Lucas's self portraits do not include words but the expressions that she uses give out an intense feeling of emotion. Her work often has an obvious message, which makes it easy to understand what she is saying. In the photograph "Human Toilet Revisited" 1999, it is clear of the message behind the image. Its obvious meaning is a normal shit morning, which many can relate to feeling the same as how Lucas looks- sitting curled upon the lowered toilet lid, smoking, deep in stressful thought. ...read more.

An example is the sculpture "Get Hold of This" 1994-5, which is a plaster form of two arms resting on each other with one arm up with the hand clenched like the fist. This is easily recognisable to any of us, and gives the effect of anger, arguing and fighting. Lucas uses many common gestures, which are renowned throughout today's society. Another example is "Receptacle of Lurid Things" 1991. It is a wax model of a middle finger by itself. This is widely known by the public for being "F*ck off". Lucas does not need to use words as she communicates through gestures, which can be recognised by everyone. They are not necessarily Lucas's fists or her finger as what she is trying to say is, is that sometimes they are our fists and our fingers, as we will all feel like this sometimes. ...read more.

Across the back of the t-shirt just above her bottom is the words complete arsehole. This a common insult that women often use for men, and so Lucas incorporated the idea of the term with an actual bottom. Lucas's work, I can agree is pretty crude and lurid, but she not only explores communication by words, but by gestures, colour and image. The meanings to her work are often simple and relative to everyday life. Lucas did many prints to do with newspaper articles that where related to topics such as sex. Her work is often questioned about if it is meant to make you think of sex. But Lucas more often not based her work on how sex degrades the true meaning of the body and how both men and women are seen more as objects and meat than what they really are. ...read more.