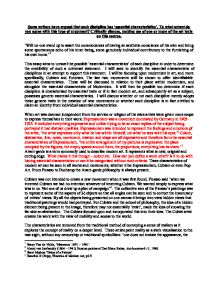 Some writers have argued that each discipline has 'essential characteristics'. To what extent do you agree with this type of argument? Critically discuss, making use of one or more of the set texts on this course.

Futurism not only influenced Italy but had profound effects in Russia, Germany and Britain. Futurism also has close links to Vorticism in that Vorticism was connected with Nazism and the power to rebel, however it is more Illusionist than Futurist. The essential characteristics of the Futurist movement where; colour, movement, dynamism, and reflecting the machine age. The subject and content were very important and where similar to Cubism in that the shapes of some of the artworks where angular in form and the use of collage was also used in Futurism, which was a revolutionary concept of Cubism. It also had similarities to Expressionism in that through the use of text and the strong messages of war, the Futurist's conveyed a form of their expression. What separates it from the other disciplines is that it is of the machine age, and it looks towards the future and not to the past. This was the essential characteristic to Futurism. Without it, it would not have that distinct feature that would separate it from Cubism, and Expressionism. Art works, such as 'Patriotic Celebration', where almost statements of the Twentieth Century living and expresses new technology within the pieces themselves. For example, the introduction of the motor car and the noise associated with industry. The use of cars and speed in the art pieces allows a certain amount of movement. Carra's 'The Red Horseman' (1913) shows movement in that the horse is seen to be running with the use of more than 4 legs being shown on the piece, a kind of mapping of the horses movement. The primary goal of the Futurist was to 'transport the spectator to the centre of the canvas, to involve him in the action of the painting and thus to awaken in him a response with the painters vision, a vision of the "inner core being".'9 The spectator would be drawn to the centre of the array of technical forms, but would then become a participant in the action taking place. ...read more.

Instead of painting the gardens and scenery that the scene could include, whistler concentrates on the sparks and fireworks and the abstract effect that they create. It could be said, therefore that whistler's pieces did have the essential characteristics of traditional representational art, but with the introduction of the scene being painted in darkness the forms change so it represents something quite different. How do you define a work of art without specific characteristics to look for? It is difficult to define modern art in a way that includes all of 20th century western art Using the idea of Picasso's in that art is not evolutionary and that it changes within itself, leaves the suggestion that all art work has essential characteristics but each discipline holds within it a core set of essential characteristics that do not differ from one another, but share certain aspects, in some form or another. This would include the illusion of space, use of colour, whether it be dull greys or fushia pinks, structure and form, identity and towards the twentieth century a degree of flatness within the art works themselves. With this in mind, in answer to whether or not I believe that each discipline has essential characteristics I would say yes, but they are not nessicarily different to each other. Art is a collective term for many disciplines and throughout it's history it has gone through changes but has kept certain recognisable traits that would make it into a work of art. 1 Henry Van de Velde, 'Memours: 1891 - 1901' 2 Alexej von Jawlensky (1864 - 1941) Russian painter of Der Blaue Reiter, das kunstwerk 11, 1948. 3 Henri Matisse 'Notes of a Painter' 4 Herschel B Chipp, Theories of Modern Art, p271 5 6 Pablo Picasso (1881 - 1973) 'Picasso Speaks' Art in Theory 7 Futurism - The Museum of Modern Art, New York, p9 8 Futurism - The Museum of Modern Art, New York, p9 9 Futurism: Politics, Painting and Performance, p22 10 11 12 Pablo Picasso, Conversation, 1935 - Theories of Modern Art, Herschel B Chipp 13 14 15 ...read more.