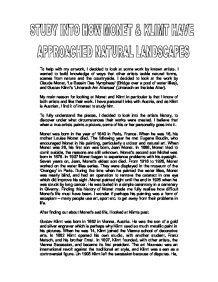 Study into how Monet &amp; Klimt have approached natural landscapes.

To help with my artwork, I decided to look at some work by known artists. I wanted to build knowledge of ways that other artists tackle natural forms, scenes from nature and the countryside. I decided to look at the work by Claude Monet, 'Le Bassin Des Nympheas' (Bridge over a pool of water lilies), and Gustav Klimt's 'Unterach Am Attersee' (Unterach on the lake Atter). My main reason for looking at Monet and Klimt in particular is that I know of both artists and like their work. I have personal links with Austria, and as Klimt is Austrian, I find it of interest to study him. To fully understand the pieces, I decided to look into the artists history, to discover under what circumstances their works were created. I believe that when a true artists paints a picture, some of his or her personality goes into it. Monet was born in the year of 1840 in Paris, France. When he was 16, his mother Louise Monet died. The following year he met Eugene Boudin, who encouraged Monet in his painting, particularly outdoor and natural art. ...read more.

He was the son of a gold and silver engraver which is perhaps why Klimt used so much metallic paint in his pictures. When he was 14, Klimt joined the Vienna school of decorative arts. In 1882 Klimt opened his own studio, with another student, Franz Matsch, and his brother Ernst. In 1897, Klimt founded, with other artists, the Vienna Secession, and became its first president. The art Nouveau was an international revolt against the traditional art style, and Klimt was seen as a controversial figure. Un 1905 Klimt left the secession because of disputes. He, together with other artists, formed a new association 'Kustschau' (art show). His work continued to shock people, as it was subtly erotic and went against traditional art. Klimt suffered a stroke in 1918 and a month later died from Pneumonia. Klimt's painting of 'Unterach Am Attersee' was done on a canvas sized 110cm x 110cm, using oil paints. He used a spotting technique to create the forest, using various shades - bright green, dark green, yellow, dark blue, and turquoise. ...read more.

Monet's work is extremely claming and restful, probably because of its dreamlike quality. You can almost hear the silence interrupted by the faint sound of leaves rustling in the breeze. It reminds me of the film Mary Poppins, where the characters jump from a chalk pavement picture into a magical experience of make believe. Klimts 'Unterach Am Attersee' is quite a cheerful picture./ The colours are bright and boldly used and suggest a place of happiness, with the bright blue sky reminds me of sunny warm Austrian days. Monet's 'Le Bassin Des Nympheas' was painted in the final years of his life, in my opinion, this natural, calming scene portrays the peace he was seeking after such a troubled life. Or possibly that he had already found in a piece, and wanted to share and express that feeling through his artwork. Klimts picture is not how a landscape would have been traditionally painted, throughout Klimts life, he was breaking away from the confinement of traditional art, and creating his own unique style of expression. This is exactly what he did with his 'Unterach Am Attersee'. Monet and Klimt has very different and individual styles, but both stunning pieces capture the beauty and personality of the natural landscape, leaving us, their audience well satisfied! ...read more.