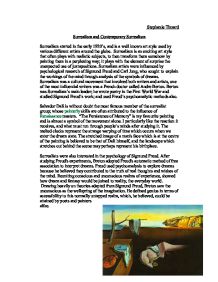 Stephanie Tizzard Surrealism and Contemporary Surrealism Surrealism started in the early 1920's, and is a well known art style used by various different artists around the globe. Surrealism is an exciting art style that often plays with realistic subjects, to then transform them somehow by painting them in a perplexing way; it plays with the element of surprise the unexpected use of juxtapositions. Surrealism artists were influenced by psychological research of Sigmund Freud and Carl Jung, who sought to explain the workings of the mind through analysis of the symbols of dreams. ...read more.

Salvador Dali is without doubt the most famous member of the surrealist group; whose painterly skills are often attributed to the influence of Renaissance masters. "The Persistence of Memory" is my favourite painting and is almost a symbol of the movement alone. I particularly like the reaction it receives, and what must run through people's minds after studying it. The melted clocks represent the strange warping of time which occurs when we enter the dream state. ...read more.

After studying Freud's experiments, Breton adopted Freud's automatic method of free association to interpret dreams. Freud used psychoanalysis to explore dreams because he believed they contributed to the truth of real thoughts and wishes of the mind. Reuniting conscious and unconscious realms of experience, showed how dream and fantasy would be joined to reality, the everyday world. Drawing heavily on theories adapted from Sigmund Freud, Breton saw the unconscious as the wellspring of the imagination. He defined genius in terms of accessibility to this normally untapped realm, which, he believed, could be attained by poets and painters alike. ...read more.