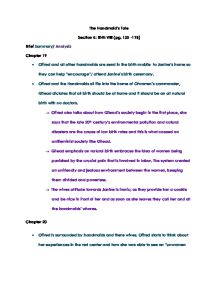 “Sanity is a valuable possession; I hoard the way people once hoarded money. I save it, so I have enough, when the time comes.” (pg. 135) Through Offred’s perspective we learn that she is comparing her sanity to money that once exists in her life.

Through the use of Character the reader learns that Moira is a mentally stable and rebellious girl who isn’t afraid to take risks. From the previous section we learned that she is a lesbian therefore she is against male-female relations, the only kind that exist in Gilead.  She is the only character that stands for rights and has made her second successful attempt to escape from the red centre. “Moira had mechanical ability.” (pg. 163) This tells the reader that she had “manly” traits (like fixing a car); Moira’s escape showed the other handmaids that IF they try they might escape. Moira blackmailed the aunt and took her to the basement where she told her to switch clothes with her, this symbolized rejection of Gilead’s attempt to define her identity.

Through situational irony and foreshadowing the reader learns that the Commander didn’t want sexual favors from Offred but instead wanted to interact and spend some time with her. The situational irony comes when the reader has anticipated that when Offred goes to her private meeting with the Commander, he’ll probably ask her have sex with her or something but instead he asks her to play scramble with her and than asks for a kiss.

Who is ABUSING their POWER more, Serena Joy, Aunt Lydia or the Commander and in what way?