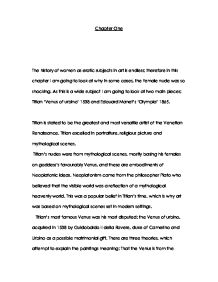 Chapter One The history of women as erotic subjects in art is endless; therefore in this chapter I am going to look at why in some cases, the female nude was so shocking. As this is a wide subject I am going to look at two main pieces; Titian 'Venus of urbino' 1538 and Edouard Manet's 'Olympia' 1865. Titian is stated to be the greatest and most versatile artist of the Venetian Renaissance. Titian excelled in portraiture, religious picture and mythological scenes. Titian's nudes were from mythological scenes, mostly basing his females on goddess's favourably Venus, and these are embodiments of Neoplatonic ideas. Neoplatonism came from the philosopher Plato who believed that the visible world was a reflection of a mythological heavenly world. This was a popular belief in Titian's time, which is why art was based on mythological scenes set in modern settings. Titian's most famous Venus was his most disputed; the Venus of urbino, acquired in 1538 by Guidobaldo II della Rovere, duke of Camerino and Urbino as a possible matrimonial gift. There are three theories, which attempt to explain the paintings meaning; That the Venus is from the mythology, a wedding picture or pornography. To understand the painting and its effect we must look at the society at that time. Women in the sixteenth century were seen as inferior to men. Men at were in control of the society at that time including women. Women were often portrayed in art at that time as objects of beauty; this is why they were portrayed as goddesses. ...read more.

In 1856 Manet went to Florence where he made a copy of Titian's Venus of urbino. The recreation he made was to become the compositional prototype he used for Olympia. In Titian's Venus her gaze is flirtatious and coy; it doesn't threaten the viewer. Her hand gently curves over her genital area invitingly. The Venus of urbino does not make the viewer feel uncomfortable even thought the picture indicates a sexual nature, it is an entertaining image. Manet's image portrays similar, yet at the same time strikingly different image of a nude young women, than in Titian's painting. Olympia's pose seems to be awkward; she is propped up on pillows like the Venus but she is in a closed interior. By focusing on the foregound, Manet has set a mysterious scene and you are left to interpret. There are no signifiers of marital status in this image. Titian and Manta's images are similar as the compositional space of Olympia gas been separated into two distinct areas of light and dark. Olympia body, the bed, and the bouquet are in stark contrast with the background. It seems that the wall, curtain, servant, and cat are composed of slight variations of the same dark colours. There seem to be no half tones just direct colour, so every thing in the image seems to relate to the brightness of Olympia's body or the darkness of the wall or the curtain in the background. Titian technique is more visually pleasing using a full range of half tones making the image more intimate and comfortable. ...read more.

Conava is similar to titian and botticelli as his approach is based on the mythological compositions and there neoplatonic ideas. He is also used these ideas to portray a discrete eroticism, as did titian. In the area of portraiture he is said to be one of the leading artists in idealization. He displayed a sensibility both to naturalism and to the early Renaissance, opening the way to two dominant trends at the beginning of the century: skilled realism and historical subject matter. Titian Titian is said to be the greatest and most versatile artist of the Venetian. Titian's art was based on three themes portraiture, religious pictures and mythological scenes which he equally excelled in all. Titian or Tiziano Vecellio was born in a small alpine village of Pieve di Cadore, now not far from the Austrian border. He arrived in Venice as a boy and became apprentice to a mosaicist. He soon entered the studio of Giovanni Bellini where he joined the famous painter Giorgione. In 1516 Titian was appionted as the official painter of the Venetian Republic. Titians most distinguished commissions was for Charles V, Titian soon after was appointed the court painter. Titian is most famous for his mythological compositions. He conformed to neoplatonic ideas that were so popular at that time. Titians style of painting involved a strong use tone, creating noble forms and warm atmospheres, Titian created beautiful mythogogical scenes but set them up as reality , Titian remained active until his death in Venice at about age 91. His last work was a Pieta' created for his own tomb. ...read more.