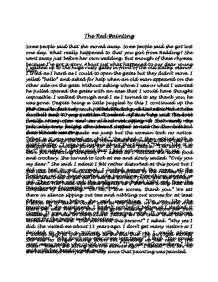 The Red Painting Some people said that she moved away. Some people said she got lost one day. What really happened to that you girl from Redding? She went away just before her own wedding. But enough of these rhymes, because I've got a story. About just what happened to our dear young lady. I walked up to the huge rusty gates in front of the old stately manor. I tried as I hard as I could to open the gates but they didn't move. I yelled "hello" and asked for help when an old man appeared on the other side on the gate. Without asking whom I was or what I wanted he pulled opened the gates with an ease that I would have thought impossible. I walked through and I as I turned to say thank you, he was gone. Despite being a little puzzled by this I continued up the path to the front door. I pulled the long chain attached to the doorbell and it rung quite laud indeed. ...read more.

"Don't you like scones?" she asked. Her head was tilted slightly as if she were a dog that was confused by something. "Oh no, I love scones, thank you." We sat there in silence sipping out tea and nibbling out scones for at least fifteen minutes before she said something. "Do you like the painting?" she questioned. I hadn't noticed it before so I studied it closely. It was a painting of the drawing room. It was identical, except for the people in the painting. I stood up to take a closer look at the people in the picture. And there she was. The girl who had gone missing just before her own wedding, she was in the picture. Sitting in the chair that the old woman was in now. "Did you know this person?" I asked. "Why yes I did. She visited me about 15 years ago. I don't get many visitors so I decided to paint a picture with her in it so I could always remember." ...read more.

I pleaded. I promise to visit you again. "That's what all the others said. And they never came back. So now you will never be able to leave." She un-hooked the painting from the wall and stepped closer toward me. I tried to yell but nothing came out. She stepped closer and I could see the girl in the picture. She was crying. The old woman had me cornered. "Now we can have tea together for as long as I live." She swung the painting at me and suddenly everything went red. It took a while for me to realize where I was until I saw her. The girl sitting in the seat where the old woman was sitting with the same pot of tea and the scones and I turned around to face where the windows would have been and saw the face of the old woman glaring in. Now that you've read this, you might be wondering how. I got this piece of paper to you, the one you're reading now. It really is quite simple; you came to visit too. You nibbled the scones you drank the tea, so you're in the painting too. ...read more.