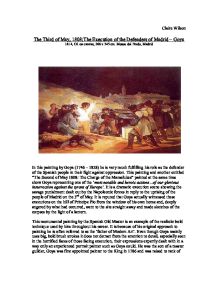 The Third of May, 1808:The Execution of the Defenders of Madrid - Goya.

Claire Wilson The Third of May, 1808:The Execution of the Defenders of Madrid - Goya 1814, Oil on canvas, 266 x 345 cm. Museo del Prado, Madrid In this painting by Goya (1746 - 1828) he is very much fulfilling his role as the defender of the Spanish people in their fight against oppression. This painting and another entitled "The Second of May 1808: The Charge of the Mamelukes" painted at the same time show Goya representing one of the 'most notable and heroic actions...of our glorious insurrection against the tyrant of Europe'. It is a dramatic execution scene showing the savage punishment dealt out by the Napoleonic forces in reply to the uprising of the people of Madrid on the 3rd of May. It is reputed that Goya actually witnessed these executions on the hill of Principe Pio from the window of his own home and, deeply angered by what had occurred, went to the site straight away and made sketches of the corpses by the light of a lantern. ...read more.

As shown in this work and in others, he often painted haunting satires depicting the flaws of humanity. In Goya's "2nd and 3rd of May" paintings he painted war and it's consequences with an amount of realism never before witnessed and with this paintings ability to depict the horror of the events Goya became one of the pioneers of the expressionist movement. It is because of this and his other revolutionary works that he earned the title of the first modernist, however this is somewhat limiting as Goya was a painter of great mystery and suspense. The tragic importance of the events depicted in the painting are highlighted because they are set against a dark, barren hill beneath a heavy night sky. A huge lantern on the ground, in-between the executioners and their victims, provides the only light source. This lantern casts an eerie light across the faces of the heroic victims, highlighting their tortured expressions. It also accentuates the vivid brightness of the white shirt worn by a kneeling figure with arms outstretched in courageous defeat. ...read more.

It is a symbol of the defence of liberty by the Spanish people and so a work of immense importance both at the time it was painted and in present circumstances. This painting and its counterpart "The 2nd of May" were painted in 1814 after the re-establishment of the Spanish throne, to 'celebrate the heroism of the people of Madrid'. At the time Goya was under investigation with regards to his behaviour during the French Occupation, namely on account of his controversial 'Mayas'(fashionable young women.) However Goya offered to paint the 2nd and 3rd of May paintings and so was retained as first painter to the new court. These paintings are therefore commissions of the Regency Council governing Spain. After Goya's completion of the two paintings they were put on the Arch of Triumph that was built in honour of King Ferdinand VII's return to Madrid. This painting was, and still is, looked upon as Spain's greatest symbol of independence. Currently it is on display in the same hall as its counterpart in the Museo del Prado in Madrid and serves as one of the most powerful and harrowing anti-war statements made by an artist. ...read more.