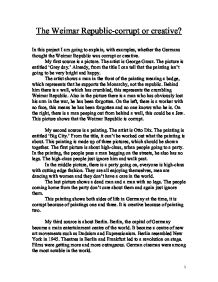 The Weimar Republic - corrupt or creative?

The Weimar Republic-corrupt or creative? In this project I am going to explain, with examples, whether the Germans thought the Weimar Republic was corrupt or creative. My first source is a picture. The artist is George Grosz. The picture is entitled 'Grey day.' Already, from the title I can tell that the painting isn't going to be very bright and happy. The artist shows a man in the front of the painting wearing a badge, which represents that he supports the Monarchy, not the republic. Behind him there is a wall, which has crumbled, this represents the crumbling Weimar Republic. Also in the picture there is a man who has obviously lost his arm in the war, he has been forgotten. On the left, there is a worker with no face, this means he has been forgotten and no one knows who he is. ...read more.

The last picture shows a dead man and a man with no legs. The people coming home from the party don't care about them and again just ignore them. This painting shows both sides of life in Germany at the time, it is corrupt because of paintings one and three. It is creative because of painting two. My third source is about Berlin. Berlin, the capital of Germany became a main entertainment centre of the world. It became a centre of new art movements such as Dadaism and Expressionism. Berlin resembled New York in 1945. Theatres in Berlin and Frankfurt led to a revolution on stage. Films were getting more and more outrageous. German cinemas were among the most notable in the world. Germany also had great universities and science centres from the Wilhelmine period. ...read more.

As well as theatres and cinemas there was a vibrant nightclub scene which involved daring floor shows, risqu� songs and naked dancing. To German people this seemed very experimental and shocking. Berlin was also famous for its transvestite balls. Every subject was discussed openly, before the war, these subjects had never been talked about openly. Now things like this were not frowned upon, at least in Berlin. This source shows that the Republic was corrupt. Looking at all of these sources, I have come to the conclusion that the Weimar Republic was both corrupt and creative. There was something for everyone in Germany because of the nightlife and cabaret and those who didn't enjoy things like that could go to all of the new art galleries and watch films. Germany was obviously a bad place to live in for some people, such as ex army officers and poor people. For the people with money life was easy and they had nothing to worry about. By Hayley Anderson. 2 1 ...read more.