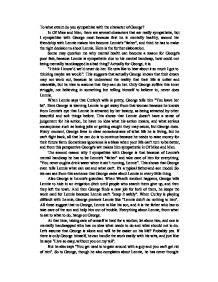 To what extent do you sympathise the character of George

To what extent do you sympathize with the character of George? In Of Mice and Men, there are several characters that are really sympathetic, but I sympathize with George most because first he is mentally healthy, second his friendship with Lennie makes him become Lennie's "father", and third he has to make the right decision to shoot Lennie. Here is the further elaboration. Some may question me why mental health can become a reason for George's poor fate, because Lennie is sympathetic due to his mental handicap, how could not being mentally handicapped is a bad thing? Actually for George, it is. "I think I know'd we'd never do her. He usta like to hear about it so much I got to thinking maybe we would". This suggests that actually George knows that their dream may not work out, because he understand the reality that their life is unfair and miserable, but he tries to assume that they can do her. Only George suffers this inner struggle, not believing in something but telling himself to believe in, never does Lennie. ...read more.

It's a typical father-and-son model. So we can see from this sentence that George cares about Lennie in every little thing. Also George is Lennie's guardian. When Weed's incident happens, George tells Lennie to hide in an irrigation ditch until people who search them give up, and then they left the town. And then George finds a new job for both of them, he keeps the work card for Lennie because Lennie can't "keep it safely". When Curley is playing difficult with Lennie, George protects Lennie like "Lennie didn't do nothing to him". All these suggest that to George, Lennie is like his son, and it is the father who has to take care of the son and help him out of trouble. Everything about Lennie, from what to eat to what to do, hangs on George. At that time, taking care of oneself is hard for a worker, let alone two, and one is mentally handicapped who has no idea what needs to do and what should not to do. Let's assume that George is alone and will he be easier on his life? ...read more.

"The hand shook violently, but his face set and his hand steadied", this indicates that George is going through a fierce struggle deep inside. Lennie is George's friend, the only friend in the world, he is George's relative, closer than real blood. How could he just kill him? And when George finally puts the trigger, he "sat stiffly on the bank and looked at his right hand that had thrown the gun away". This shows that he can't stand the loss of Lennie, and until that moment does he really realize that Lennie is gone for good. In this lonely world, all he has is Lennie and he killed him with his own hand. What's worse, he has to go on his life, with clear consciousness of what he has done, and in his rest life, he will be tortured by Lennie's haunting face. What a poor man! In conclusion, I sympathize with the character of George because he knows clearly what he is going through but has no power to fight back, and the real burden Lenned gives him plus his willingness to take on this burden, and of course his shooting to Lennie. His tragic ending makes Of Mice and Men better than other novels with similar themes. ...read more.