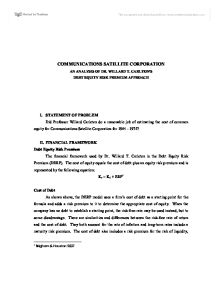 COMMUNICATIONS SATILLITE CORPORATION AN ANALYSIS OF DR. WILLARD T. CARLTON'S DEBT EQUITY RISK PREMIUM APPROACH I. STATEMENT OF PROBLEM Did Professor Willard Carleton do a reasonable job of estimating the cost of common equity for Communications Satellite Corporation for 1964 - 1975? II. FINANCIAL FRAMEWORK Debt Equity Risk Premium The financial framework used by Dr. Willard T. Carleton is the Debt Equity Risk Premium (DERP). The cost of equity equals the cost of debt plus an equity risk premium and is represented by the following equation: Ke = Kd + ERP1 Cost of Debt As shown above, the DERP model uses a firm's cost of debt as a starting point for the formula and adds a risk premium to it to determine the appropriate cost of equity. When the company has no debt to establish a starting point, the risk-free rate may be used instead, but to some disadvantage. There are similarities and differences between the risk-free rate of return and the cost of debt. They both account for the rate of inflation and long-term rates include a maturity risk premium. The cost of debt also includes a risk premium for the risk of liquidity, marketability, and default that is not a part of the risk-free rate. Government bonds can be used to determine the appropriate risk-free rate. Either T-bonds or T-bills can be used for this determination. The length of the project should play a part in deciding which Treasury instrument to use. When dealing with short-term rates, liquidity and marketability risks are typically increased, but default, maturity, and inflation risks are usually decreased. Although the risk-free rate can be used as an estimated starting point for the Debt Equity Risk Premium framework, a company will have some degree of liquidity, marketability, and default risk not represented by a government rate. Because of this, using the risk-free rate is not always an accurate predictor of a firm's cost of equity. ...read more.

In the case, the leveraged beta for AT&T is given (0.7) and to compare this beta with Comsat, the Hamada equation is used to find AT&T's unleveraged beta. The unleveraged beta is found by dividing AT&T's leveraged beta by [1+ (1-T) (D/E)] (see Exhibit 6). This calculation will result in AT&T's unleveraged beta (0.4375). In comparing AT&T's unleveraged beta (0.4375) with Comsat's unleveraged beta (1.4), it is obvious that AT&T is not a good comparable for Comsat. Comsat has a lot more risk compared to AT&T. If the numbers for AT&T are used as an estimation of Comsat's numbers, the real risk of Comsat is going to be understated. The beta for AT&T is less than one, which means that it is less volatile than the market (less risky), but Comsat's beta is greater than one, which means that it is more volatile than the market (more risky). Comsat at 1.4, in theory, is 40 percent more risky than the market.4 Business Risk * Technological Risk: Organizations that operate in the technological field face a high risk because the technology could become obsolete suddenly if a new breakthrough is discovered. Therefore, the faster a firm's product gets obsolete, the greater business risk the firm has. Comsat's satellite technology was a new and untried technology in the period (1964 - 1975). In addition, the risk of failure of launch was very high. In contrast, AT&T had been in business since 1885, thus it had a more mature and established product. In conclusion, Comsat faced a higher technological risk than AT&T. * Demand Variability Risk: The more stable demand for a company's products, the lower the business risk, all else being equal. Comsat encountered difficulties in forecasting demand because its customers were a few large public utilities and had only a few years of relative growth. Conversely, AT&T had been a stable organization with constant demand and several years of consistent growth. ...read more.