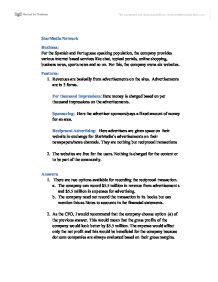 StarMedia Network Business: For the Spanish and Portuguese speaking population, the company provides various internet based services like chat, topical portals, online shopping, business news, sports news and so on. For this, the company owns six websites. Features: 1. Revenues are basically from advertisements on the sites. Advertisements are in 3 forms. Per thousand impressions: Here money is charged based on per thousand impressions on the advertisements. Sponsoring: Here the advertiser sponsors/pays a fixed amount of money for an area. Reciprocal Advertising: Here advertisers are given space on their website in exchange for StarMedia's advertisements on their newspapers/news channels. They are nothing but reciprocal transactions 2. The websites are free for the users. Nothing is charged for the content or to be part of the community. ...read more.

of the previous answer. This would mean that the gross profits of the company would look better by $5.5 million. The expense would affect only the net profit and this would be beneficial for the company because dot com companies are always evaluated based on their gross margins. 3. As a member of FASB, we would allow the barter transaction to be recorded if and only if the same type of advertisement had been sold/ bought not before 6 months to parties unrelated to the buyers/sellers. If such reliable estimates of fair value are not available then the revenue and the cost should not be allowed to be recorded. ...read more.

In summary, the report is quite poor. The report states that the company owns six websites and describes how the websites receive revenue. However the report is lacking detail and shows only a very basic understanding of how business operate. ...

The report states the the six websites receive their revenue from adverts. However the student hasn't explained what program there will use for this. The most popular program is known as Google Adsence, whereby website owners can place adverts within their website and receive funds per click. This ins't mentioned within the report. This would show the examiner that the student understands the academic understanding alongside using real commercial case studies which shows a good understanding of the commercial environment. The four bullet points are quite difficult to understand, as this isn't within the student's own words. It would be advised to explained the bullet points in a way which the examiner can understand with ease.