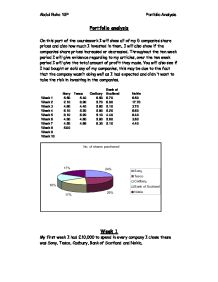 The 2nd Company I had invested in was Tesco the supermarket, last week it had made a increase of �1.00 whereas this week I had made yet another loss of �0.20p this had meant that it had brought my share prices down to �6.00 and the value of shares to �1111 although this was not a big decrease I was unhappy about it as so far 2 of my companies had made losses in my 6th week of investment, the total percentage of decrease was a measly 3% but it was still a decrease. My 3rd company was Cadbury which I had made a loss with I had now made a profit of �1.20 I was ecstatic over this because now 2 of my companies had made positive increases and I was only hoping that this would continue with all of my companies. The share price for Cadbury was �5.60 and brought the value of shares to �8358 this also meant that the total percentage of increase was 27% "Cadbury Schweppes expects to beat sales and margin targets this year after the business was boosted by continued strong recovery in UK chocolate sales and growing signs that it is winning chewing gum share from market leader Wrigley's in several key markets" Explains Cadburys Increase. My 4th company was Bank of Scotland I really was going to sell this company until I saw the huge profit of �0.70p that I had made, I had felt this was huge because so far RBS has been doing very low and has made a lot of losses the share price was now �5.80 and the value of shares at a total of �8923 and the total percentage of increase of 13%. My 5th and final company that I had invested in was Nokia I have been doing very well with Nokia but this week they let me down because they made a loss of �0.30p it is not much but it ended by week in bad spirits as the value of shares was now �12461 and the total percentage of decrease at a 3% decrease. ...read more.

The value of shares was �10481 and the percentage of increase was 15% this was very pleasing and so far the last week of investment was going very well. The 3rd Company that I have invested in was Cadbury as all the other companies had done very well and made high increases and I expected them to do so too. But as last week I made a �0.10p increase there was not much difference this week both as they had made an increase of �0.43p and that was a good thing also because it brought my value of shares even higher to �10769, the share price was �7.00 and the percentage of increase was only 7%, but this did not disappointment me much as it also made my first 3 companies into profit. The 4th Company that I have invested in was RBS now as last week RBS made an increase of �0.42p and this week was the last investment week I wanted to get a good profit so value of shares exceeded �10000. This week i made an increase of a small �0.18p I was very disappointed with this and knew that my value of shares must be low too which was �9850 and the share prices were �6.60 and total percentage of increase at a measly 2% i was very sad and hoped that the final company would do me proud. My 5th and final company was Nokia the telecommunications, last week i made a reasonable amount of increase and this was my last company so i wanted it to be higher profit but i had run out of luck because i had only made a increase of �0.40p and the value of shares was very low at �8923, this was low but i felt neutral because it was a increase and not a loss of profit, the percentage of increase was 7% ?? ?? ?? ?? Abdul Buho 10P Portfolio Analysis ...read more.