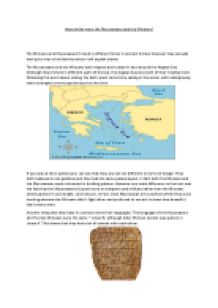 Describe the similarities between the Minoans and Mycenaeans

Transfer-Encoding: chunked ﻿How similar were the Mycenaeans and the Minoans? The Minoans and Mycenaeans thrived in different times in Ancient history however they actually had quite a lot of similarities which I will explain below. The Mycenaeans and the Minoans both reigned and traded in and around the Aegean Sea. Although they thrived in different parts of Greece, the Aegean Sea was both of their trading roots. Following this point about sailing, thy both spent some time sailing in the water, with sailing being there strongest a most popular sport at the time. Map/Still If you look at their pottery you can see that they are not too different in terms of design. ...read more.

This shows that they had a lot of contact with each-other. http://www.albpelasgian.com/wp-content/uploads/2014/02/linearB.gif They both also lived in the Bronze Age and had the same weapons and tools available although the Mycenaeans used them a lot more than the Minoans. Looking at their art, we also know that they both worshipped the same ?Snake Goddess? and although their depictions of her are different, they all have the same idea. From this we can see that the Mycenaeans took some aspects of the Minoans. Bull-Leaping also seemed like quite a normal idea, with many pictures showing different people leaping over the bulls. One of the major similarities is that they both liked spending their wealth through gold and stylish palaces and very extravagant pieces of equipment. ...read more.