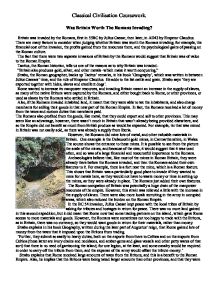 Was Britain Worth The Romans Invading?

Classical Civilisation Coursework. Was Britain Worth The Romans Invading? Britain was invaded by the Romans, first in 55BC by Julius Caesar, then later, in AD43 by Emperor Claudius. There are many factors to consider when judging whether Britain was worth the Romans invading; for example, the financial cost of the invasion, the profits gained from the resources there, and the psychological gains of passing on the Roman culture. The fact that there were two separate invasions of Britain by the Romans would suggest that Britain was of value to the Roman Empire. Tacitus, the Roman historian, tells us one of the reasons as to why Britain was invaded- "Britain also produces gold, silver, and other metals- which make it worth conquering." Strabo, the Roman geographer, backs up Tacitus' remarks, in his book 'Geography', which was written in between Julius Caesars' time, and the rule of Emperor Claudius. He adds to the list cattle and grain. Strabo says 'they are exported together with hides, slaves and excellent dogs'. Rome wanted to increase its manpower resources, and invading Britain meant an increase in the supply of slaves, as many of the native Britons were captured by the Romans, and either bought back to Rome, or other provinces, or used as slaves by the Romans who settled in Britain. Also, if the Romans invaded inhabited land, it meant that they were able to tax the inhabitants, and also charge merchants for selling their goods in that new part of the Roman Empire. In fact, the Romans received a lot of money from the taxes and custom duties that merchants paid. ...read more.

They showed that a lot of Britain had been successfully conquered, as the buildings were so spread out. The structures also showed that the Romans were powerful enough in Britain to be able to build so many of the buildings, and also for them to be built without the objections of locals, as many have remained quite intact. One drawback to the Roman's occupation of Britain was the building of Hadrian's Wall. It was first being built in AD 122, and took about 10 years to complete, measuring roughly 117 kilometres long. It was built to keep out the northern tribes from trying to gain back land, and was used as a fort by Roman garrisons. The source on the left shows a section of Hadrian's Wall, and shows how well the wall was built. The quality of the construction suggests that a lot of the Romans' resources were used in the building of the wall. In fact, it was the largest wall in the Roman Empire, and took 20,000 men to build it. However, despite taking 10 years to build, it was abandoned soon after the construction was finished, which would indicate that it was a huge waste of resources; but, even though it was not used much by the Romans, it has become a symbol of the Roman occupation of Britain, and so, although a financial loss, its construction was a psychological gain. The first expedition that Julius Caesar was in charge of to Britain did not do much to boost the image of the Roman military, as they had to retreat. However, it was viewed as a success in regards to Roman politics. ...read more.

Luckily for the Romans, they managed to gain control of the revolt. Boudicca later fled back to Norfolk, where she killed herself with poison. The Romans would've lost confidence in the garrisons that were stationed in Britain as a result of this uprising, and may have encouraged inhabitants in other provinces to revolt against the Romans. Also, the revolt led by Boudicca was the beginning of the end of Roman rule in Britain. The rebellion, whilst not being a direct cause to the Roman exit of Britain, seeing as the Romans left a few hundred years later, may have been a contributing factor; and thus reduced the size of the empire. In conclusion, I think that the Roman invasion of Britain was probably worth all the trouble to the Romans. It is probable that they made a profit, and that financially, it was a good venture for Rome, as not only did they receive money from Tributes, but were also able to trade with those on the island, and had more access to resources. It also enabled Rome to expand its empire, which would have meant more public support, and therefore made those involved (i.e. Julius Caesar, Emperor Claudius) more powerful and greater in the Roman publics eyes. The overall confidence boost to the Roman people would have been a big reason as to why Britain was worth the Romans invading. Also, not only did the invasion benefit Rome, the Romans, particularly Emperor Augustus, believed that the Britons benefited from the conquest too, as they also had new trading partners, and they had more facilities and buildings, that were constructed by the Romans. Therefore, I believe that, despite some drawbacks, for example the uprising, the Roman occupation of Britain was, overall, a good venture for the Roman Empire. ...read more.