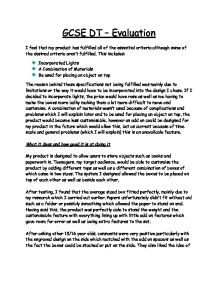 GCSE DT - Evaluation I feel that my product has fulfilled all of the essential criteria although some of the desired criteria aren't fulfilled. This includes: * Incorporated Lights * A Combination of Materials * Be used for placing an object on top The reason behind these specifications not being fulfilled was mainly due to limitations or the way it would have to be incorporated into the design I chose. If I decided to incorporate lights, the price would have rose as well as me having to make the boxes more bulky making them a lot more difficult to move and customise. A combination of materials wasn't used because of complications and problems which I will explain later and to be used for placing an object on top, the product would become less customisable, however an add on could be designed for my product in the future which would allow this, but as current because of time scale and general problems (which I will explain) ...read more.

After asking other 15/16 year olds, comments were very positive particularly with the engraved design on the side which matched with the add on spacers as well as the fact the boxes could be stacked or put on the side. They also liked the idea of the customisable top which could be turned into a different wide range of add-ons which could have been added to in the future if desired. There were few negative comments which were probably due mainly to pure politeness! Having said this, the ones I received were well constructed such as the fact that paper couldn't be placed flat without it sticking out the side as well as the fact that the choice of finish allowed the pine to show which was of a colour too bright to some people's preference. Modifications and/due to Problems One major problem I came up against was the fact that I was unable to cast a peg. ...read more.

Because of time restrictions, it wasn't possible to create other add-ons such as the CD rack I planned earlier on. Instead I opted in a different material which would make the product more appealing (aesthetically pleasing). Accuracy was also another problem which I faced when joining the boxes together. I originally planned to join the boxes directly against each other. Because of 8mm holes being in the top and the bottom, 8mm dowel had to be used and the fact is that there was no room for error which became a problem. I solved this by creating a spacer which contained 6mm dowel which would slot into both the bottom and top box. This was a viable solution. Design problems also caused the boxes to be connected sideways only one possible direction as the boxes would not slot into each other on one side. This problem was one which I didn't fix as the boxes could still tessellate one way which made this problem very minor. ...read more.

This student written piece of work is one of many that can be found in our GCSE Resistant Materials section.