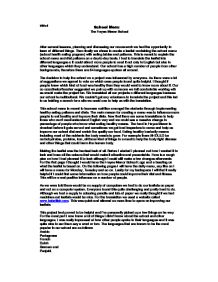 Mikhail School Menu The Hayes Manor School After several lessons, planning and discussing our coursework we had the opportunity to learn of different things. Then finally we chose to create a leaflet containing the school menu (school health eating program) with eating tables and patterns. This is meant to explain the school menu and diet patterns on a day-to-day basis. I had to translate the leaflet into different languages o it could attract more people to read it not only in English but also in other languages which they understand. Our school has a high number of people from other backgrounds, therefore there are 64 languages spoken all around. The decision to help the school on a project was influenced by everyone. As there were a lot of suggestions we agreed to vote on which ones people found quite helpful. I thought if people knew which kind of food was healthy then they would want to know more about it. Our co-coordinator/teacher suggested we pair up with someone we felt comfortable working with as would make the project fun. ...read more.

Lastly for my backspace I will find it really helpful if I could find some information on how people could improve their diet and fitness. This will be a real positive influence on a number of people. As we were told there would be no supply of computers we had to do our leaflets on paper and not on a computer system. Everyone found this quite challenging and pretty hard to do. Although we had a supply in colouring pencils and lots of paper we really thought if we had machines out leaflets would be nice. For the translation we used a website called www.babelfish.com. This was quick and allowed us more time to spare on improving our leaflets. This project had proved to be helpful and I've personally picked up a few things on he way. For the most part I now know a lot of things I didn't know about the school and other languages. I was really impressed at how other people spoke in their languages and it was quite nice to ear them say a word or two. ...read more.

The presentations we had prepared were not good to a certain extent and I think we could have done much better. I didn't like the way I designed my leaflet, I found it too bright and it didn't have enough pictures of food materials. The way my work was laid out was poor and if we have machines there could have been no problem with all these things. The reason behind us doing hand-written leaflets was to improve our presentational skills and craft out something from nowhere. Nevertheless if we were given another chance to improve our projects I would need a computer to show a clear leaflet and some understanding in my task. The other thing we didn't get is a lot of advise from our teacher and application skills, including knowledge and understanding. All in all I've had a lot of fun with the project and I quite liked it. I really hope this could be the kind of breakthrough our school needed all along. I believe that in the future there will be students that are going to admire the work I've done and hopefully improve it to another standard. Mikhail ?? ?? ?? ?? ...read more.