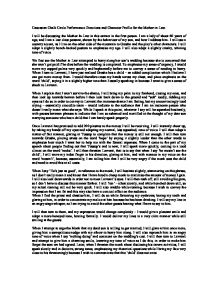 Caucasian Chalk Circle Performance Directions and Character Profile for the Mother-in-Law. I will be discussing the Mother-In-Law in this extract in the first person. I am a lady of about 60 years of age, and I am a low-class peasant, shown by the behaviour of my son, and how I address him. I will use a country accent, as I live on the other side of the mountain to Grusha and the play's other characters. I will adopt a slightly hunch-backed posture to emphasise my age. I will also adopt a slightly creaky, whining tone of voice. We first see the Mother in Law attempted to hurry along her son's wedding because she is concerned that she won't get paid if he dies before the wedding is completed. To emphasise my sense of urgency, I would move my cupped palms very quickly and haphazardly before me to convey a sense of needing to hurry. When I turn to Lavrenti, I have just realised Grusha has a child - an added complication which I believe I can get more money from. I would therefore cross my hands across my chest, and place emphasis on the word 'child', saying it in a slightly higher tone than I usually speaking in because I want to give a sense of shock to Lavrenti. ...read more.

When I say 'He's just as good', in reference to the monk, I will hesitate slightly, stammering on this phrase, as I don't really mean it and know that I have hired a cheap monk to maximise the amount of money I gain. I will also look downwards in order not to meet Lavrenti's eyes. I will then rush off, still avoiding his gaze, so I don't have to discuss this manner further. I will 'run' - albeit slowly, and while hunched down still, so my actual running will not be very quick. I will also waddle while running, because I wish to convey the impression that I am fat and this may also have a comical effect on the audience. When I find the priest and chastise him, I will do so while furrowing my eyebrows, baring my teeth and glaring at him, in order to concentrate my malice at him because he has been drinking. I will say my line in an angry stage whisper, as I am trying to avoid the other guests hearing what I have to say to him. I will then turn to them, and my expression would change completely - I would give a pleasant smile and adopt a more honeyed tone, bowing formally. ...read more.

an upset manner to indicate to her that I am not please with the way in which she is behaving having hear news that does not concern me, or, so I think, her. I will then get up and give a forced smile at the guests to give the impression that things are still all right. The next significant moment is when my son, Yussup, gets up. I will be amazed and incredulous as I believed my son's end was night. To convey this, I would gape at him, standing rooted to the same spot, and then shake my head whilst my eyes where closed, then opening them once more and blinking twice to indicate that I cannot believe what I am seeing. In the next part of the scene, when I tell Grusha that my son wants her, I will say the line while placing particular, mocking, stress on the word 'peasant' because I do not really see my son in this way but enjoy addressing him thus because I am quite a heartless person. When my son complains that his water is too cold, I will immediately say my line about fetching some hot water very quickly, because he is the kind of person that is easily upset, and I do not want to incur his wrath if possible. ...read more.