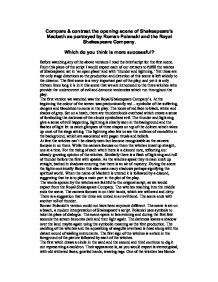 Compare &amp; contrast the opening scene of Shakespeare's Macbeth as portrayed by Roman Polanski and the Royal Shakespeare Company. Which do you think is more successful?

Compare & contrast the opening scene of Shakespeare's Macbeth as portrayed by Roman Polanski and the Royal Shakespeare Company. Which do you think is more successful? Before watching any of the above versions I read the brief script for the first scene. From this piece of the script I would expect each of our extracts to fulfill the wishes of Shakespeare: set in 'an open place' and with 'thunder and lightning.' Yet these are the only stage directions so the production and direction of this scene is left widely to the director. The first scene is a very important part of the play, and yet it is only thirteen lines long it is in it this scene that we are introduced to the three witches who provide the undercurrent of evil and demonic tendencies which run throughout the play. The first version we watched was the Royal Shakespeare Company's. At the beginning the colour of the screen was predominantly red - symbolic of the suffering, dangers and bloodshed to come in the play. ...read more.

During the scene the lights continually flicker this also casts many shadows perhaps signifying the spiritual world. When the name of Macbeth is uttered it is followed by a discord, suggesting that he is to play a main part in the plot of the play. The words spoken by the witches are faithful to the original script, as we would expect from the Royal Shakespeare Company. The witches reaching into the middle ends the scene. The camera focuses in on their hands, which are withered and dirty. There is a suggestion that the three are united in an evil bond. The scene ends with another roll of thunder. Roman Polanski's version could not have been anymore different. The scene is set on a beach, a modern interpretation of Shakespeare's script. Polanski uses symbols to take the place of dialogue. The scene opens in late evening and during the first few seconds the screen becomes dark and then light again. The darkness leaves a shadow over the land maybe again using the symbolic meaning as the first production. ...read more.

Herbs are added to signify the binding together of a spell, the hole is covered up again and blood is poured over it. The witches then spit together over the hole again maybe symbolising the unity of the three witches. The witches now begin speaking with the last lines of the scene and then return to the beginning of the text, there is a significant pause before the word 'Macbeth.' The last three lines are missed out. The witches then go off in different directions and leave no footprints in the sand reinforcing our thoughts that the witches are not of this world the wind howls, closing the scene with an eerie feeling. In my opinion Roman Polanski's version is the better of the two, there is more of a symbolic meaning enforcing the thoughts of William Shakespeare. I enjoyed watching the Polanski version more, as the acting seems to be more 'natural' than the quality of acting in the Shakespeare Company's version. The only drawback to Polanski's version, I think is that he is not loyal to Shakespeare's original script and stage directions. If adhered to, Shakespeare's literary genius and Polanski's fantastic imagery could bind together to create a fantastic production of Macbeth. James McLoughlin 12M ...read more.