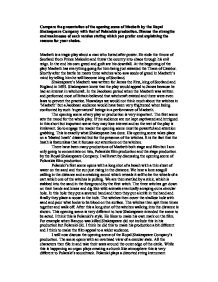 Compare the presentation of the opening scene of Macbeth by the Royal Shakespeare Company with that of Polanskis production. Discuss the strengths and weaknesses of each version stating which you prefer and explaining the reasons for your choice.

Compare the presentation of the opening scene of Macbeth by the Royal Shakespeare Company with that of Polanskis production. Discuss the strengths and weaknesses of each version stating which you prefer and explaining the reasons for your choice. Macbeth is a tragic play about a man who lusted after power. He stole the throne of Scotland from Prince Malcolm and threw the country into chaos through his evil reign. In the end his own greed and guilt are his downfall. At the beginning of the play Macbeth has everything going for him being just awarded the Thane of Cawdor. Shortly after the battle he meets three witches who sow seeds of greed in Macbeth's mind by telling him he will become king of Scotland. Shakespeare's Macbeth was written for James the First, king of Scotland and England in 1603. Shakespeare knew that the play would appeal to James because he had an interest in witchcraft. In the Jacobean period when the Macbeth was written and performed most of Britain believed that witchcraft existed and there were even laws to prevent the practice. ...read more.

The witches then cover the shallow hole with sand and pour what looks to be blood on the surface. The witches then spit three times together and walk off. After this a long shot of the witches walking into the distance is shown. This opening scene is very different to how Shakespeare intended the scene to be acted. I think this is Polanski's style. He likes to make his own mark on the film. For example when Banquo was killed Shakespeare did not include this in his production but Polanski did. I think he did this to make his production a bit different and I think to make the film appeal to a wider audience. I will now discuss the opening scene of the Royal Shakespeare Company's production. The scene opens with an overhead view of a circular state. All the characters then file in and take their seats around the outer edge of the circle. While this is happening an organ plays creating a church like atmosphere this is very different to Polanski's soundtrack. ...read more.

You seem to understand me, By each at once her choppy finger laying Upon her skinny lips; you should be women, And yet your beards forbid me to interpret That you are so. Both productions have been very clever in bringing their respective scenes to life. The RSC production relies totally on lighting costume and audio due to it being a stage production. I think the Royal Shakespeare Company's witches come across very well. They look, act and sound more evil than Polanski's. I think this is an area were Polanski could improve his production. Polanski is very good at setting the mood. I felt the RSC jumped too quickly into the main text of the scene. I liked the way Polanski took a shot of a red sky possibly to show the blood shed to come in the play and I liked the way the witches fade away into the fog of the beach. Personally I prefer Polanski's production. As soon as you see the opening shot you just want to see what happens next. The RSC rushed their opening scene and the addition of Duncan just confuses things for me. By Richard Harpur ...read more.