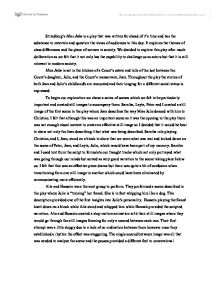 Strindberg's Miss Julie is a play that was written far ahead of it's time and has the substance to entertain and question the views of audiences to this day. It explores the themes of class differences and the place of women in society. We decided to explore this play after much deliberation as we felt that it not only has the capability to challenge us as actors but that it is still relevant to modern society. Miss Julie is set in the kitchen of a Count's estate and tells of the lust between the Count's daughter, Julie, and the Count's manservant, Jean. Throughout the play the stories of both Jean and Julie's childhood's are recounted and their longing for a different social status is expressed. To begin our exploration we chose a series of scenes which we felt to be particularly important and created still images to accompany them. Samiha, Layla, Peter and I created a still image of the first scene in the play where Jean describes the way Miss Julie danced with him to Christine. I felt that although this was an important scene as it was the opening to the play there was not enough visual content to create an effective still image so I decided that it would be best to show not only the Jean describing it but what was being described. Samiha role playing Christine, and I, Jean, stood on a block to show that we were what was real and looked down on the scene of Peter, Jean, and Layla, Julie, which would have been part of my memory. Samiha and I used text from the script to formulate our thought tracks which not only portrayed what was going through our minds but served as very good narration to the scene taking place below us. ...read more.

Julie played by Alia stood on a block which allowed her to look down on Peter and Hannah; this represented her contempt with religion. We created the final still image as a group. We took abstract images from the last page of the script and created a set of images depicting Julie at the gates of heaven. We based our three images on the lines "tell me the first may also receive the gift of grace", "I belong to the very last, I am the last." and "And the first shall be the last". The next step was to hot-seat the main characters in a way that expressed their personality. Layla came up with the idea recreating the scene in the barn and having Julie dance with different people as they questioned her. We created a semicircle of blocks around Julie who was being played by Layla. The remaining eight of us paired up, stood on the blocks and froze in dancing positions. Layla would randomly tear one of us down to her level, strike a pose and pause long enough for us to have our question answered before throwing us back and dragging someone else in. I felt that this method was particularly effective because it was Layla who was in control as Miss Julie is and the randomness of who was chosen represented her wild side. I felt that a conscience tunnel would be particularly effective in Jean's hot seating as it would allow questions to be fired at him from all directions which represent the dilemma he was in, I also felt it would contrast well with his unexcitable facade. ...read more.

Both played the roles being spoken effectively and Layla lip-synced well. This was interesting to watch but not very interesting to perform since there was quite a bit of time where you would have been frozen in one position. I feel that it would have been far more productive had this been done in smaller groups. To end our exploration we created a piece of abstract theatre based on the dreams which Jean and Julie described. We created an ascending curved staircase using blocks. I lay below the highest block and said my monologue talking about how I would like to reach the top of this metaphorical tree and plunder the golden eggs, to look at the world from the top. Julie role played by Alia then said her monologue from the top block looking down saying how she is longing to fall down to the ground and then fall even further, how she cannot get down from this pillar she is on top of. All the while Samiha role playing Christine sat on the lowest block and faced her back away to represent the loss of interest in her by both Jean and Julie. Meanwhile Hannah and Maryam were turning around the scene holding red scarves to represent the lust that the play was so full of. We then froze at which point Peter, Hussein and Omar enter singing drunkenly to show that Jean and Julie had had sex as this is the way it was represented in the play. Hannah then wrapped her scarf around Alia keeping her from moving down the ladder while I was kept from moving up by Maryam. We did this to show that at the end of the play no characters dream was fulfilled and it is quite possible that Miss Julie ended up committing suicide. ...read more.