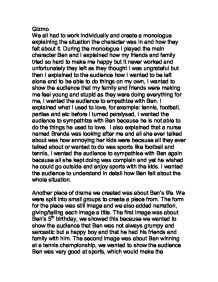 Gizmo We all had to work individually and create a monologue explaining the situation the character was in and how they felt about it. During the monologue I played the main character Ben and I explained how my friends and family tried so hard to make me happy but it never worked and unfortunately they left as they thought I was ungrateful but then I explained to the audience how I wanted to be left alone and to be able to do things on my own, I wanted to show the audience that my family and friends were making me feel young and stupid as they were doing everything for me, I wanted the audience to empathize with Ben. I explained what I used to love, for example: tennis, football, parties and etc before I turned paralysed, I wanted the audience to sympathize with Ben because he is not able to do the things he used to love. I also explained that a nurse named Brenda was looking after me and all she ever talked about was how annoying her kids were because all they ever talked about or wanted to do was sports like football and tennis, I wanted the audience to sympathise with Ben again because all she kept doing was complain and yet he wished he could go outside and enjoy sports with the kids. ...read more.

but after the incident all the love disappeared and the happiness and love turns into sadness and despair, this made the audience sympathise with Ben as he will never be able to do anything again. Also in the second piece during the cross cutting there was a contrast where in one scene they were calm and quiet while in the other scene they were shouting and angry, this showed the audience that Ben's family members were also annoyed and frustrated about the situation. The levels used on the second piece was also a contrast as Ben was sat down on a chair paralysed while his little sister was stood up looking down at him, this showed the audience that Ben was treated like a little kid as he was paralysed and people had to do things for him as he couldn't move, which him look stupid, young and useless. One the second piece the fifth image represented family love as on the picture we all hand one hand on a family member's shoulder to show we stick together and that we love each other. I represented paralyse by trying to make my legs, arm, hand and hands drop to the floor, this must of made the audience empathise with Ben as they knew what was wrong with him. ...read more.