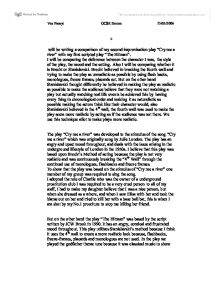 GCSE CRY ME A RIVER

GCSE CRY ME A RIVER

I will be writing a comparison of my second improvisation play “Cry me a river” with my first scripted play “The Hitman”.

I will be comparing the deference between the character I was, the style of the play, the mood and the setting. Also I will be comparing whether it is Brecht or Stanislavski. Brecht believed in breaking the fourth wall and trying to make the play as unrealistic as possible by using flash backs, monologues, freeze frames, placards ect. But on the other hand Stanislavski thought differently he believed in making the play as realistic as possible to make the audience believe that they were not watching a play but actually watching real life events he achieved this by having every thing in chronological order and making it as naturalistic as possible making the actors think like their character would, also Stanislavski believed in the 4th wall, the fourth wall was used to make the play seem more realistic by acting as if the audience was not there. We use this technique allot to make plays more realistic.

The play “Cry me a river” was developed to the stimulus of the song “Cry me a river” which was originally sung by Julie London. The play has an angry and upset mood throughout, and deals with the issue arising in the underground lifestyle of London in the 1950s. I believe that this play was based upon Brecht’s Method of acting because the play is not very realistic and was continuously breaking the “4th Wall” through the continual use of monologues, flashbacks and freeze frames.

To show that the play was based on the stimulus of “Cry me a river” one member of my group was required to sing the song.

I adopted the role of Charlie who was the owner of a underground prostitution club I was required to be a very cruel person to all of my staff, I had to make my daughter believe that I was a nice person, but when she dressed as a whore, and when I saw Elisa with her and took the blame out on her and tried to kill her with a base ball bat, this is when I am shot by my No.1 prostitute to stop me killing her friend.

But on the other hand the play “The Hitman” was based by the script written by JCW Brook in 1990. It has an angry, comical and frustrated mood throughout. This play utilizes Stanislavski’s method because I think it uses the 4th wall to create a more realistic look because, flashbacks, freeze-frames, placards and monologues are not used. In the play we played the godfather theme tune because it was classical music to show that we were an older couple and because it had a mysterious ring to it showing the audience that some thing was coming in the up later on in the play. In this play I have adopted the role of George a man in his 50s or 60s who is married to a posh woman and he as had enough of her and wants her dead, He hires a Hitman to do so.

These plays are totally different one is a Stanislavski like play the other is a Brecht. One is unrealistic the other is realistic. The have totally different styles. The lighting and music have no resemblance because two different moods were trying to be created and it is the music and lighting which create the mood of a play. I enjoyed both of the plays but Hitman was more of a comical interesting play to work on.