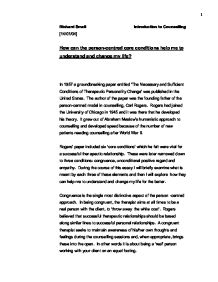 How can the person-centred core conditions help me to understand and change my life?

Richard Small Introduction to Counselling [14/01/04] How can the person-centred core conditions help me to understand and change my life? In 1957 a groundbreaking paper entitled 'The Necessary and Sufficient Conditions of Therapeutic Personality Change' was published in the United States. The author of the paper was the founding father of the person-centred model in counselling, Carl Rogers. Rogers had joined the University of Chicago in 1945 and it was there that he developed his theory. It grew out of Abraham Maslow's humanistic approach to counselling and developed speed because of the number of new patients needing counselling after World War II. Rogers' paper included six 'core conditions' which he felt were vital for a successful therapeutic relationship. These were later narrowed down to three conditions: congruence, unconditional positive regard and empathy. During the course of this essay I will briefly examine what is meant by each three of these elements and then I will explore how they can help me to understand and change my life for the better. Congruence is the single most distinctive aspect of the person-centred approach. In being congruent, the therapist aims at all times to be a real person with the client, to 'throw away the white coat'. Rogers believed that successful therapeutic relationships should be based along similar lines to successful personal relationships. ...read more.

Would people be more forgiving of others' mistakes? Would I? I think I would find empathising all the time quite a difficult thing to do, not just in my personal life but also towards society as a whole. How can I empathise with people who do things beyond my comprehension? In some ways I believe it is easier not to empathise with some people. Walking past a beggar in the street is far easier to do when you blame the person for their predicament rather than empathising with them about it. In the past year I have attempted to empathise more with the people around me. If someone in my life loses their temper, I do often try to understand that their attack is not actually aimed at me, at least not always (!) Normally they are stressed or have simply had a bad day and at that moment are seeing the world in a particularly negative manner. This thought process has considerably reduced the number of arguments I have in my personal life. In some ways it has also helped me to grow (or maybe grow up?). Understanding that my parents are 'real' people with their own thoughts and feelings, fallible people capable of making mistakes and deserving the right to have these mistakes understood for what they were and to be forgiven for them. ...read more.

Not quite so hard in a therapeutic setting, but in everyday life, which is, I suppose, the most important place to try it! Carl Rogers' core conditions theory and his creation of person-centred counselling changed the face of therapy worldwide. The aims and conditions have helped many thousands of people during the last fifty years. I believe each of the three conditions would be difficult but worthwhile to achieve personally. Their inclusion into my way of viewing the world has helped to make it a more positive and less 'scary' place. I do attempt to see good in all people, which makes dealing with people a much easier event than when I feared most people. Showing more understanding towards those closest to me has led to a more peaceful existence. The numbers of arguments I now have in my life are far fewer than previously. It has led to my finding less destructive ways of sorting out issues, which may come up in my personal life. This enables me to have more energy for the positive things that I want to do. So overall including these core conditions into my life, as best I can, has been a very positive move. I believe I have only just started out on the right road and hopefully, in the years to come, I can include them more fully and continue to grow in the positive direction that I currently am. ...read more.