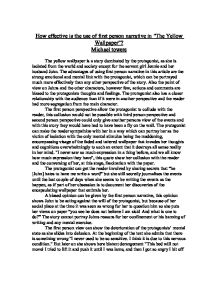 How effective is the use of first person narrative in &quot;The Yellow Wallpaper&quot;?

How effective is the use of first person narrative in "The Yellow Wallpaper"? Michael towers The yellow wallpaper is a story dominated by the protagonist, as she is isolated from the world and society except for the servant girl Jennie and her husband John. The advantages of using first person narrative in this article are the strong emotional and mental link with the protagonist, which can be portrayed much more effectively than any other perspective of the story. Also the point of view on Johns and the other characters, however few, actions and comments are biased to the protagonists thoughts and feelings. The protagonist also has a closer relationship with the audience than if it were in another perspective and the reader had more segregation from the main character. The first person perspective allow the protagonist to collude with the reader, this collusion would not be possible with third person perspective and second person perspective could only give another persons view of the events and with this story they would have had to have been a fly on the wall. ...read more.

A biased opinion can be given by the first person narrative, this opinion shows John to be acting against the will of the protagonist, but because of her social place at the time it was seen as wrong for her to question him so she puts her views on paper "you see he does not believe I am sick! And what is one to do?" The story cannot portray Johns reasons for her confinement or his banning of writing and any mental exercise. The first person view can show the deterioration of the protagonists' mental state as she slides into delusion. At the beginning of the text she admits that there is something wrong "I never used to be so sensitive. I think it is due to this nervous condition." But later on she shows here blatant derangement "This bed will not move! I tried to lift it and push it until I was lame, and then I got so angry I bit off ...read more.

this is a less obsessive and much brighter view of the paper. This story of "The Yellow Wallpaper" would not have the same powerful effect on the reader if it were written from another point of view. The protagonist could not collude with the audience, she could not ask rhetorical questions and she could not make the reader involved with her defiant, secret acts of writing. The reader could not feel as if they were hiding with her and the reader could not be persuaded to take her side on the issues arising from the paper and her confinement. The whole script would be a hollow and boring case study of a seemingly mad woman if it was not told by her, she brings life to the story. The protagonist could not ask "but what is one to do?" with the same half asking the audience. I think that the effectiveness of the first person perspective in "the Yellow Wallpaper" is much more involving for the reader and it makes the story seem more real than any other way of writing. ...read more.