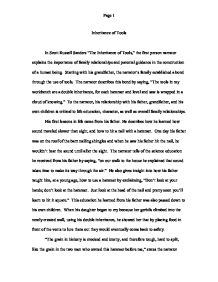 In Scott Russell Sanders &quot;The Inheritance of Tools,&quot; the first person narrator explains the importance of family relationships and parental guidance in the construction of a human being

Inheritance of Tools In Scott Russell Sanders "The Inheritance of Tools," the first person narrator explains the importance of family relationships and parental guidance in the construction of a human being. Starting with his grandfather, the narrator's family established a bond through the use of tools. The narrator describes this bond by saying, "The tools in my workbench are a double inheritance, for each hammer and level and saw is wrapped in a cloud of knowing." To the narrator, his relationship with his father, grandfather, and his own children is critical to life education, character, as well as overall family relationships. His first lessons in life came from his father. He describes how he learned how sound traveled slower than sight, and how to hit a nail with a hammer. One day his father was on the roof of the barn nailing shingles and when he saw his father hit the nail, he wouldn't hear the sound until after the sight. ...read more.

From the experiences with his father and the stories of his grandfather, the narrator describes how he obtained his character and personality. The character lessons learned from his grandfather begin with the story of the house he built. He says, "after proposing marriage to a neighbor girl, my grandfather used this hammer to build a house for his bride on a stretch of river bottom in northern Mississippi." One character lesson he learned from his father is explained when the narrator says, "["If you're going to cut a piece of wood,"] my father insisted, ["You owe it to the tree to cut it straight."]" This may seem like a typically carpentry lesson, but the narrator learns, if you are going to do something you should do it correctly. The author took pride in the work completed by his hands and spoke of how there are machines these days that do things much easier, yet he refused to use them because of what he learned with his double inheritance. ...read more.

The narrator uses the same circumstances to build strong relationships with his own children. He states, "So I have seen my apprenticeship to wood and tools reenacted in each of my children, as my father saw his own apprenticeship renewed in me," after watching his son and daughter do some of the same things he did as a child. His double inheritance also taught him compassion that he used on his daughter when her gerbils were stuck in the wall he had built. The narrator took his daughter's breath away when he said, "And if that doesn't do the trick, I'll tear the wall apart until we find them." This taught his daughter that she was more important to him than the hours of craftsmanship he put into building the wall. Each person in this family is affected by the love and kindness that was passed down from the generation before, which aided in a strong family foundation that is still being shared today. ?? ?? ?? ?? Page 1 ...read more.