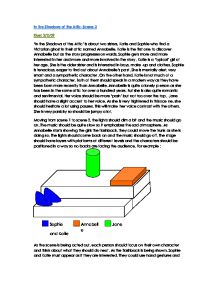 In the Shadows of the Attic

In the Shadows of the Attic-Scene 2 Due: 2/2/09 'In the Shadows of the Attic' is about two sisters, Katie and Sophie who find a Victorian ghost in their attic named Annabelle. Katie is the first one to discover Annabelle but as the story progresses onwards, Sophie gets more and more interested in her and more and more involved in the story. Katie is a 'typical' girl of her age. She is the older sister and is interested in boys, make-up and clothes. Sophie is tenacious, eager to find out about Annabelle's past. She is mentally alert, very smart and a sympathetic character. On the other hand, Katie is not much of a sympathetic character. Both of them should speak in a modern way as they have been born more recently than Annabelle. Annabelle is quite a lonely person as she has been in the same attic for over a hundred years. ...read more.

For example: As the scene is being acted out, each person should focus on their own character and think about what they should do next. As the flashback is being shown, Sophie and Katie must appear as if they are interested. They could use hand gestures and point out at what they are being shown. Their facial expressions should look as if they are horrified at what had happened to Annabelle. They should not just sit there; they should react at the same time. When Jane first appears, she should look very nervous and say her first line in a terrifying voice. As soon as she has said her first line, Annabelle should react quickly when it is her turn to speak. Jane should hesitate when replying as she is unsure of what to say. When Jane hesitates again at the end of her line 'He...he said...,' Annabelle should have a bit of curiosity in her voice wanting to know what her father had said about her. ...read more.

Annabelle gets ready to leave via the window when she hears a noise from outside. Both of them should freeze in the position that they are in so it looks natural. At this point Katie and Sophie should also look very terrified. The father then speaks. His voice should be overbearing and quite powerful. After he has spoken, there should be a short blackout to indicate that the flashback has ended. Sophie gets up wanting to know what happened next. She should say her next line during the blackout which is, 'What happened? What did he do?' After she has said this line, the lights should come back on and show Annabelle in the middle drifting off into the shadows in a ghost-like way. Sophie tries to go after her with her hands in front of her shouting, 'Annabelle!' Katie should follow Sophie. The two girls are left looking at each other. While they stay in that position, the music should come back on and the lights should fade into scene 3. By Zara Shaikh S9 ...read more.