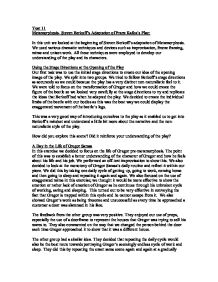 In this unit we looked at the beginning of Steven Berkoffs adaptation of Metamorphosis. We used various dramatic techniques and devices such as improvisation, freeze framing, mime and unison work.

Year 11 Metamorphosis- Steven Berkoff's Adaptation of Franz Kafka's Play: In this unit we looked at the beginning of Steven Berkoff's adaptation of Metamorphosis. We used various dramatic techniques and devices such as improvisation, freeze framing, mime and unison work. All these techniques were employed to develop our understanding of the play and its characters. Using the Stage Directions at the Opening of the Play Our first task was to use the initial stage directions to create our idea of the opening image of the play. We split into two groups. We tried to follow Berkoff's stage directions as accurately as we could because the play has a very distinct non-naturalistic feel to it. We were told to focus on the transformation of Gregor and how we could create the figure of the beetle so we looked very carefully at the stage directions to try and replicate the ideas that Berkoff had when he adapted the play. We decided to create the individual limbs of the beetle with our bodies as this was the best way we could display the exaggerated movement of the beetle's legs. This was a very good way of introducing ourselves to the play as it enabled us to get into Berkoff's mindset and understand a little bit more about the narrative and the non-naturalistic style of the play. How did you explore this scene? Did it reinforce your understanding of the play? A Day in the Life of Gregor Samsa In this exercise we decided to focus on the life of Gregor pre-metamorphosis. ...read more.

Entrance of Chief Clerk First of all we sat down as a group and discussed the role of the Chief Clerk. We came up with similar ideas, particularly that the Chief Clark was an oppressive figure and that he represented a higher class within a kind of feudal system in which the characters existed. After this we were told to create freeze-frames representing oppression and fear in a symbolic manner. We found it very difficult to separate the ideas and create two different freeze frames. We both came up with scenes that symbolised fear very quickly however when it came to oppression we could only think of physical representations rather than symbolic ones. This exercise really helped us understand the meaning of oppression and fear and how we could apply it separately to the role of the Chief Clerk. Next we were told to turn those freeze frames into a performance. We were not allowed to use dialogue so we used rhythm and movement as a way of expressing our characters. We decided that we could put the two ideas we had discussed together and use rhythm to demonstrate the sense of oppression that the family felt under the Chief Clerk. I took the role of the Chief Clerk while Matthew and James played the role of the Family. We thought it was important that we portrayed the family as a whole rather than as individual characters as it made more sense within the context of this exercise. ...read more.

Work Completed So Far: Using the Stage Directions at the Opening of the Play: Your first task was to use the initial stage directions to create your idea of the opening image of the play. You had to try and follow his intentions as accurately as you could to understand the Non-Naturalistic style of the play. (Focus on creating the bug) A Day in the Life of Gregor Samsa: Your next task was a way of exploring the before-time of the play by looking at Gregor's life pre-insect. The point of this was to establish a better sense of character and to look at what Gregor feels about his own life. Here we focused on Non-Verbal communication/Movement and Mime. Gregor's point of View: Your next exercise was to explore the opening scene from Gregor's point of view. Focusing on how he felt the family treated him. You had to interpret your own non-naturalistic idea whilst taking key elements from the dialogue on the page. Entrance of the Chief Clerk: We discussed what role the Chief Clerk represented within the play and his character being linked to the idea of communism and feudal systems. First you had to create Freeze-frames of Oppression and Fear in a symbolic way. Then you had to produce two different versions of the scene; the first focusing only on sound and movement, with Rhythm and tempo playing an important role. The second was to allow each character two words, which best symbolised their character traits. You could compare the effectiveness of the scenes you were in and what you watched. START GETTING SOME PARAGRAPHS TOGETHER. WE STILL HAVE PRACTICAL WORK TO DO!! ...read more.