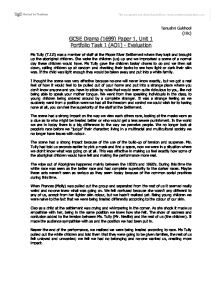 Tanushri Gukhool (10c) GCSE Drama (1699) Paper 1, Unit 1 Portfolio Task 1 (AO1) - Evaluation Ms Tully (T.I.R) was a member of staff at the Moore River Settlement where they kept and brought up the aboriginal children. She woke the children (us) up and we improvised a scene of a normal day these children would have. Ms Tully gave the children tasks/ chores to do and we then sat down, calling children up at random and checking their backs to see how light or dark their skin was. If the child was light enough they would be taken away and put into a white family. ...read more.

In the world we are in today there is a big difference to the way we perceive people. We no longer look at people's race before we "judge" their character; living in a multiracial and multicultural society we no longer have issues with colour. The scene had a strong impact because of the use of the build-up of tension and suspense. Ms. Tully had told us seconds earlier to pick a mask and find a space, now we were in a situation where we didn't know what was going on at all. This was effective in making us feel exactly how some of the aboriginal children would have felt and making the performance more real. The wipe out of Aborigines happened mainly between the 1930's and 1960's. ...read more.

Cleo as a child at the settlement was crying and whimpering in the corner. As she shook it made us empathise with her, being in the same position we knew how she felt. The show of sadness and confusion added to the tension between Ms. Tully (Mr. Neville) and the rest of us (the children). It made the audience sympathise with as and the position we had been put in. Nearer the end of the performance, we realised we were being treated according to race. Ms Tully pulled out the white children and told them that they were going to be given families, the rest of us felt unloved and unwanted; we felt we had no belonging and no-one wanted us, creating more impact. ?? ?? ?? ?? ...read more.