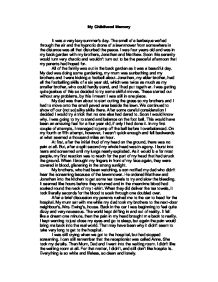 My Childhood Memory It was a very lazy summer's day. The smell of a barbeque wafted through the air and the hypnotic drone of a lawnmower from somewhere in the distance was all that disturbed the peace. I was four years old and was in my back garden with my brothers, Jonathan and Matthew. Soon this serenity would turn very chaotic and wouldn't turn out to be the peaceful afternoon that my parents had hoped for. All of the family was out in the back garden as it was a beautiful day. My dad was doing some gardening, my mum was sunbathing and my brothers and I were kicking a football about. Jonathan, my elder brother, had all the footballing skills of a six year old, which was twice as much as my smaller brother, who could hardly stand, and I had put together. I was getting quite jealous of this so decided to try some skilful moves. These started out without any problems, by this I meant I was still in one piece. My dad was then about to start cutting the grass so my brothers and I had to move onto the small paved area beside the lawn. We continued to show off our (not so) silky skills there. After some careful consideration I decided I would try a trick that no one else had dared to. ...read more.

Fortunately, this was all that had to be done as nothing serious had been damaged. This cleaning process was interrupted several times by me vomiting. I don't know why this was as I had stopped feeling so sick. After the nurses finished, they put a bandage round my head, which I would have to keep on until I went to bed. It looked like someone had made a pathetic attempt at mummifying me, and I was very embarrassed to be wearing it. About twenty minutes after the two nurses who had been cleaning my head left, another female doctor came into the already cramped room. It contained my parents and I, as well as quite a large bed. Now this woman came in and made the space situation much worse. The doctor carried two x-rays of my head in a folder under my arm. It was only then that I was told what the large machine above the black table was. When I saw these 'photographs' of my head, I was stunned to see what they looked like. They were like the skeletons out of a film and I was fascinated to see what was under my mop of dark brown hair. After this doctor left, I thought that my ordeal was over but I was wrong. Little did I know hospitals are not fast and I shouldn't have expected to leave so efficiently. ...read more.

Also, I was told that if I picked at the scab that was forming, I would have to come back to the hospital again. This was a good enough warning for me so I left it well alone. I was very grateful that it was the summer holidays. I couldn't have faced the possibility of tapping the back of my head off anything at school and it bleeding all over the place. However, I wouldn't have minded letting my imagination run wild, to see how many variations of the story I could make up for my friends. Maybe I had been chased by a rhinoceros when it clipped me with its huge horn. Perhaps it had been the flying sword, thrown by the pirate that I just about managed to duck out of the way of. Disappointingly, the injury sustained was when I was trying to show off and things didn't go quite how I hoped they would. Out of all the memories that I have remembered, this one stands out the most, probably because every time I touch the back of my head I am reminded of it. I think that reminders of memories are a good way not to lose touch with your childhood. Frequently people ask me how I got the scar on the back of my head, and I tell the whole story again. Perhaps that is why I remember the event so vividly. Christopher Russell 11T English Mrs. Giffin ...read more.