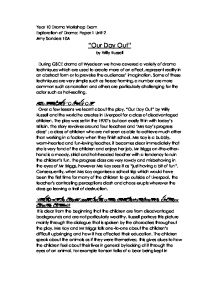 Our Day Out - By Willy Russell

Year 10 Drama Workshop Exam Exploration of Drama: Paper 1 Unit 2 Amy Sanders 10A "Our Day Out" by Willy Russell During GSCE drama at Wyedean we have covered a variety of drama techniques which are used to create more of an effect, represent reality in an abstract form or to provoke the audiences' imagination. Some of these techniques are very simple such as freeze framing, a number are more common such as narration and others are particularly challenging for the actor such as hot-seating. About the play 'Our Day Out' Over a few lessons we learnt about the play, "Our Day Out" by Willy Russell and the world he creates in Liverpool for a class of disadvantaged children. The play was set in the 1970's but can easily fit in with today's Britain. The story revolves around four teachers and 'Mrs Kay's progress class' ; a class of children who are not seen as able to achieve much other than working in a factory when they finish school. Mrs Kay is a bubbly, warm-hearted and fun-loving teacher, it becomes clear immediately that she is very fond of the children and enjoys her job. Mr Briggs on-the-other-hand is a moody, strict and hot-headed teacher with a tendency to ruin the children's fun. The progress class are very rowdy and misbehaving in the eyes of Mr Briggs, however Mrs Kay sees it as "just having a bit of fun". Consequently, when Mrs Kay organises a school trip which would have been the first time for many of the children to go outside of Liverpool, the teacher's contrasting perceptions clash and chaos erupts wherever the class go leaving a trail of destruction. What picture does Russell create of the children's home life and how does he do this? It is clear from the beginning that the children are from disadvantaged backgrounds and are not particularly wealthy. ...read more.

It also showed how the children are easily influenced by one another and tend to copy each other, for example, as soon as one child tries to steal some of the sweets, another will notice and will copy. We also learnt of Mrs Kay's generosity, however this could be seen as favouritism in the eyes of the likes of Mr Briggs. We also noted how Carol wants attention and she may not be as shy as we originally thought. Scenario 2: Stealing the animals Question or choices being explored: Again we hoped to add a more organised structure to the scenes. We also wanted to show more the difference between the children's behaviour when they are in the company of their classmates to when a teacher is accompanying them because at first it was the children alone in the scene and we wanted to show the comparison. How the scene unfolded: We added more characters - teachers - to show the difference of their personalities when with teachers. The scene became more interesting and mini-events occurred within the one scene, for example, separate mini-conflicts broke out between little groups of children which were settled by the teachers. Mrs Kay took Mr Briggs away for some coffee which he reluctantly accepted and then eventually the children stole the animals. What we learnt about the characters and their situations: The main focus was that Mrs Kay is very trusting towards the children and truly doesn't care about leaving them unsupervised unlike Mr Briggs. We also learnt again of how the children tend to follow one another because they all end up stealing an animal. What is the importance or significance of the Zoo scene? The Zoo scene is an important scene because it is where we find out a lot about the children's lives and personalities; it gives us a deeper more personal insight into the children's emotions. ...read more.

My views on Mrs Kay have changed a lot; I used to believe that Mrs Kay was just a nice person who was often willing to put her trust in lots of people - even in children, but know I think that Mrs Kay is much too soft on the children and is a little divorced from reality. She needs to understand that the children aren't the little angels she believes them to be and that a line needs to be drawn in order to discipline and control their bad-behaviour. However my views on Mr Briggs haven't changed as much, apart from the fact that he loves being in control, I have realised that he has more of a sensitive side to him than meets the eye. He hides the fact that he has had fun on the trip by ruining the pictures and goes back to the old Mr Briggs we met at the beginning of the play. This shows me that deep down he has warmer feelings towards to children but these are clouded by his stern and grumpy outer appearance. Which activity gave you the greatest insight into the teachers and their teaching methods? The role play between Mr Briggs and Mrs Kay after Carol had supposedly died because I was one to one and showed how they dealt with a death of someone quite close - especially close to Mrs Kay. This reveals of variety of hidden characteristics which aren't revealed until something very traumatising occurs. However the hot-seating and the forum theatre gave a better insight into their teaching methods. It showed how they coped with the children misbehaving and Mr Briggs contrasting reaction to Mr Kay's, this says a lot about their personalities too - dealing with tough situations involving the children. What I have learnt about the children and their lives The children have good hearts and never mean to cause any harm, but their ignorance and naivety lets them down. They are obviously not the brightest of children and do not ...read more.