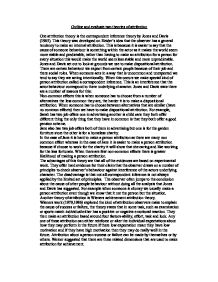 Outline and evaluate two theories of attribution One attribution theory is the correspondent inference theory by Jones and Davis (1965). This theory was developed on Heider's idea that the observer has a general tendency to make an internal attribution. This is because it is easier to say that the cause of someone behaviour is something within the actor as it makes the world seem more stable and predictable, rather than having to make an attribution for a person for every situation this would make the world seem less stable and more unpredictable. Jones and Davis set out to look at grounds we use to make dispositional attribution. There are certain behaviour we expect from certain people because of their job and there social roles. When someone acts in a way that is uncommon and unexpected we tend to say they are acting intentionally. When this occurs we make special kind of person attribution called a correspondent inference. This is an interference that the actor behaviour correspond to there underlying character. Jones and Davis state there are a number of reasons for this: Non-common effects this is when someone has to choose from a number of alternatives the less common they are, the harder it is to make a dispositional attribution. ...read more.

They offer hard evidence for their claim that the observer draws on a number of principles to check observer's behaviour against interference of the actors underlying character. The disadvantage is that not all-correspondent inference is not always applied by the limited set of principles. The observer often jumps to the conclusion about the cause of other people behaviour without doing all the analysis that Jones and Davis has suggested. For example when someone is clumsy we usually make a person attribution even though we know that it not the person but the situation. Another theory of attribution is Wieners achievement attribution theory. Wieners work (1979,1986) explored the kind of attribution observers make to explain the cause of success or failure, the theory states that in some task, such as examination or sports match individual either has a positive or negative emotional reaction. They then make an attribution based around four factors-ability, effort, task and luck. Any one of these attribution can either reinforce or alter the individual expectations about how they may perform in the future if there low expectation mean they have low motivation and if they have high motivation then they may do really well in the future. ...read more.

For example if a person did brilliantly in an exam they probably make an internal attribution that goes for the same as if they did really bad they are more likely to make an external attribution. The advantages of this theory is that this theory is well supported by evidence of empirical studies also Weiner made a connection between the attribution process and motivation, it show that a person attribution may have a long term effect on future behaviour, it also show that there emotion in the attribution process unlike Kelley, Jones and Davis where attribution are mental calculations. The disadvantage to Weiner theory is that most of the evidence come from the laboratory and are artificial so can these result be generalised beyond the laboratory therefore has low ecological validity. Lastly these finding are not the same in every culture although his theory can be applied to most cultures. For example, Indian participant made more external, unstable and uncontrollable attribution. This is probably because individual powers to control events are limited. Also westerner tend to use person attribution to explain success whereas the Japanese are more like to explain success by situational factor so they're fore culture plays a big role in how people think. ...read more.