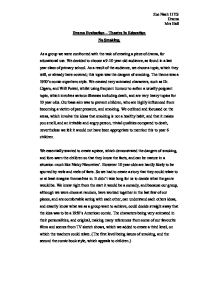 Drama Evaluation - Theatre In Education No Smoking. As a group we were confronted with the task of creating a piece of drama, for educational use. We decided to choose a 9-10 year-old audience, as found in a last year class of primary school. As a result of the audience, we chose a topic, which they will, or already have covered; this topic was the dangers of smoking. The theme was a 1950's comic superhero style. We created very animated characters, such as Dr. Cigaro, and Will Power, whilst using frequent humour to soften a usually poignant topic, which involves serious illnesses including death, and are very heavy topics for 10 year olds. Our base aim was to prevent children, who are highly influenced from becoming a victim of peer pressure, and smoking. We outlined and focussed on the areas, which involve the ideas that smoking is not a healthy habit, and that it makes you smell, and an irritable and angry person, trivial qualities compared to death, nevertheless we felt it would not have been appropriate to mention this to year 6 children. ...read more.

Because we couldn't spend a lot of time developing costume and scenery, we tried to make it rather simple. To allow the children to focus on message rather than the shiny package. We also had talked as a group of exploring our characters further and experimenting with different situations, how a character would handle it and why, and also accents. Accents are an easy way of detaching yourself from your character and therefore making it easier to play. Some in the group including myself didn't use accents, and this made it far harder to become that character in our minds. We structured it in the usual scene style of introducing the characters Will Power and Dr. Ding. We used a mock introduction; our aim here was to make play with the idea that Dr. Ding was going to talk for the whole piece instead of there being any other acting, and so when Will Power came on, he could explain the character traits of Dr. ...read more.

Our successes with the piece were that it was very spontaneous and bright, which appealed to the young audience, and the characters were well loved, (judging by the feedback sheet.) We enjoyed performing, as during rehearsals and practices, as our problem during rehearsals was that the humour didn't carry to an audience of 13 who had heard all of the jokes at least 110 times over, then crushing our confidence. However we felt much more relaxed when the children watched it. The heath and safety matters were that some of the scenes were very physical. David Edgar has to roll around on the floor simulating a fight between himself and a mock cigar. He could well have hurt himself whilst dragging himself across the floor. Similarly David Roberts had to run offstage in an exaggerated style, through the audience. If he had fell it could have hurt himself and the people around him. We also had to carry our own props on and off the stage and they were quite heavy, which could have resulted to injury. Zoe Nash 11YS Drama Mrs Hall ...read more.