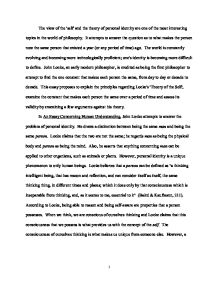 The view of the 'self' and the theory of personal identity are one of the most interesting topics in the world of philosophy. It attempts to answer the question as to what makes the person now the same person that existed a year (or any period of time) ago. The world is constantly evolving and becoming more technologically proficient; one's identity is becoming more difficult to define. John Locke, an early modern philosopher, is credited as being the first philosopher to attempt to find the one constant that makes each person the same, from day to day or decade to decade. This essay proposes to explain the principles regarding Locke's 'Theory of the Self', examine the constant that makes each person the same over a period of time and assess its validity by examining a few arguments against his theory. In An Essay Concerning Human Understanding, John Locke attempts to answer the problem of personal identity. He draws a distinction between being the same man and being the same person. Locke claims that the two are not the same; he regards man as being the physical body and person as being the mind. Also, he asserts that anything concerning man can be applied to other organisms, such as animals or plants. However, personal identity is a unique phenomenon to only human beings. ...read more.

Parrots and men are both rational, but he concludes that it is having a certain form and figure that makes the man. Hence, being the same person (through consciousness) does not depend on having the same substances. At the outset, Locke's argument appears to be groundbreaking; it eliminates problems that other theories regarding personal identity fail to elucidate. Firstly, Locke's theory allows for change in a person as well as allowing s/he to still be the same person. The decisive factor of memory allows the properties of people to change and, mutually, maintain the same personal identity. For example, my body, personality and mindset have changed since my tenth birthday, yet others do not reach the conclusion that I am a different person. Secondly, Locke's philosophy opposes the claim that the soul is the source of personal identity. He does not disprove the existence of the soul, but merely averts it from being a necessary component for one's personal identity. Locke's basic assumption seems flawless; if I can remember that I did something, then it must have been me who performed that action. Although these lines of reasoning aid in showing the validity of Locke's theory, arguments against his philosophy do exist. One problem that arises regarding Locke's constant for personal identity is that memory is fallible; it has many flaws. If personal identity is based on memory, then does it follow that if I do not remember everything that happened to me, I am not the same person? ...read more.

This suggests that thinking does not necessarily entail an awareness of thinking. There are countless, familiar tasks that we perform that are not required for us to be aware that we are thinking, such as crossing the street, chewing our food or typing this essay. Since this argument attacks the principles of Locke's theory, it disproves his belief that thinking always entails an awareness of thinking. These examples may be defended by arguing that our subconscious is responsible for thinking, even though we may not be aware that we are. However, John Locke fails to mention the idea of a subconscious. In his absence to examine the continuity of consciousness in our subconscious, Locke fails to answer questions such as 'What happens when we go to sleep'? As stated earlier, Locke is credited as being the first philosopher to attempt to find the one constant that makes each person the same, from day to day or decade to decade. He believes that continuity of consciousness is this constant and holds that without memories, it would be impossible for one to think and act. Locke's 'Theory of the Self' fails to address such issues such as the subconscious and assumes that thinking regularly coexists with an awareness of thinking, which was proved to be false. Therefore, I believe that Locke's theory of the continuity of consciousness and the attempt to convince me that I am the same person throughout my life, unfortunately, is nothing more than an innovative effort. ...read more.