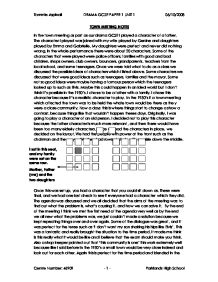 TOWN MEETING NOTES In the town meeting as part as our drama GCSE I played a character of a father. The character I played was joined with my wife played by Genine and daughters played by Emma and Gabrielle. My daughters were perfect and never did nothing wrong. In the whole performance there were about 20 characters. Some of the characters that were played were police officers, families with good and bad children, shops owners, club owners, bouncers, grandparents, teachers from the local school, and some teenagers. Once we were told what to do as a class we discussed the possible ideas of characters which I listed above. Some characters we discussed that were good ideas such as teenagers, families and the mayor. Some not so good ideas were maybe having a famous person which the teenagers looked up to such as Elvis. Maybe this could happen in an ideal world but I don't think it's possible in the 1950's. ...read more.

This was a fantastic and really brought the situation to the time period. It made me think is this really what it would be like and I believe that the exam should make you think. Also a shop keeper pointed out that 'this community is one' this work extremely well because like I said before in the 1950's a small town would be very close indeed and look out for each other. Again this is perfect for the time period and blended in the meeting just fine. I made a comment saying 'it's all down to the parents'. I feel this fit into the time period to but slightly different to the other comments. This doesn't show the characters getting on as a unit but it does show that the children behave by how they are brought up. This is exactly how it would have been in the 1950's. The parents say right from wrong the children agree. Also I made a comment saying 'look at her she's not even doing anything. ...read more.

If the meeting were modern it would probably be calmer than that situation. So straight away there contrast is strong because if it would have been calmer now then it would be a lot calmer in the 1950's. I think it started off great and it started to go off track when things were said, just so you could get a word in or you wouldn't say anything at all. I did work well and some parts were true to the time period it just depends on how you interpret it. There were far too many similarities with today's way of life. We were talking about things which hadn't even been invented yet, it was too rowdy and people were talking above authority. There was no outcome of the meeting and again the whole situation was just one big Parrot. Finally I personally think that the problems were to extreme, eggs thrown at old peoples homes yes but not kicking the doors in, teenagers had only just come around they wouldn't of been this radical yet. ?? ?? ?? ?? Tommie Aspinall DRAMA GCSE PAPER 1 UNIT 1 06/10/2008 Centre Number: 46909 - 1 - Parklands High School ...read more.